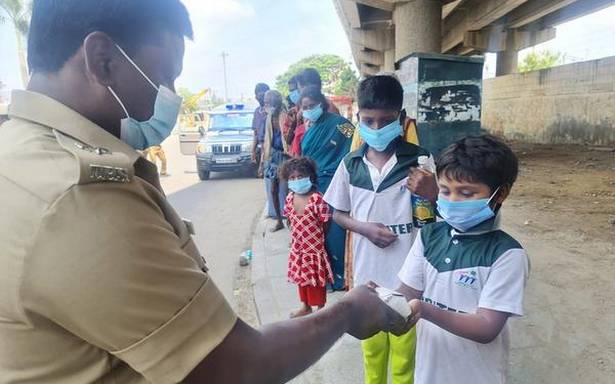 Breakfast, masks were distributed during lockdown

While Chennai came under a total lockdown on Sunday, the city police did not allow the homeless to go without food. Many police officers gave food to those living on the pavements.

“Many of the urban homeless are dependent on people who donate food. As there was restricted public movement, City Police Commissioner Mahesh Kumar Aggarwal instructed us to provide food to those in need,” a senior police officer said.

In the St. Thomas Mount police limits, Deputy Commissioner K. Prabhakar distributed breakfast and masks to the homeless. “I have 16 law and order stations in my limits. I have asked all the stations to feed the needy in their limits,” he said.

M. Manomani, Inspector, Seven Wells Police Station, said she and her team provided breakfast and lunch to over 100 people. “There are many urban homeless in my limits. We went around and distributed food since morning,” she said.

Triplicane inspector S. Seetharaman said he arranged food for over 200 persons. “I have been doing it continuously since last year,” he added.

In Tirupattur, District Superintendent of Police P. Vijayakumar and his team donated food to the homeless. “We purchased 15 food packets and distributed them among those living at bus stands and railway stations. From next week, we will collaborate with NGOs to feed the poor,” he said.