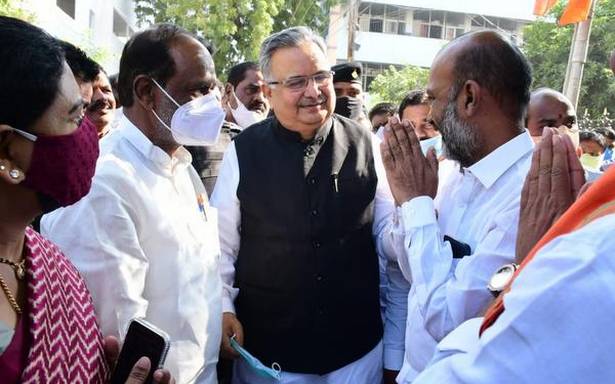 Terming the police raid on Karimnagar MP’s camp office during “Jagarana Deeksha” here on Sunday night as a “cruel and inhuman act”, BJP national vice-president and former chief minister of Chhattisgarh Raman Singh said the BJP cadres will resolutely strive to make the “dictatorial regime” at the helm in the State bite the dust soon.

Addressing mediapersons, Mr. Singh alleged that the Telangana Rashtra Samithi (TRS) regime was hell bent on unleashing repression against the BJP functionaries for fighting for the cause of the aggrieved employees and teachers affected by the controversial GO 317.

“Having realised the growing resentment against their dictatorial regime and unable to digest the TRS’s defeat in Huzurabad byelection, the persons at the helm in the TRS dispensation have been resorting to vengeful acts,” he charged, saying the countdown of the TRS “tyrannical” regime’s fall has begun.

“Undeterred by the foisting of false cases, the BJP rank and file in the State will spearhead the fight against the autocratic and family rule in the State to its decisive end,” he said.

Earlier in the day, the party State leaders met former Choppadandi MLA Bodige Shoba in the district jail, where she is lodged in connection with the case related to “Jagarana Deeksha” incident.