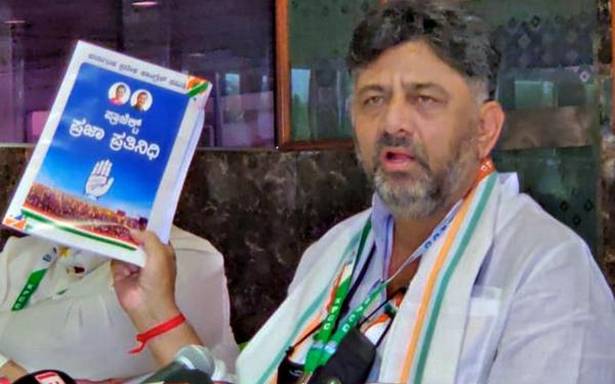 The State Congress held a Bengaluru divisional-level party meeting here to chalk out its future struggles and protests against the “anti-people policies” pursued by Union and State governments.

Speaking to mediapersons after the daylong meeting with office-bearers of blocks and district Congress committees and frontline outfits of the party, Mr. Shivakumar alleged that the police had been filing false cases against party workers and threatening them with dire consequences if they declined to join or support the ruling BJP.

The party had decided to stage protests in front of police stations to take action on the party lines, he said.

He said the State government had withdrawn some of the social welfare programmes launched by the erstwhile Congress governments led by Siddaramaiah and later the JD(S)–Congress coalition government. Party workers had been told to launch protests against the departments seeking restoration of such schemes, he said.

The KPCC chief said Leader of the Opposition in the Legislative Assembly Siddaramaiah and other party leaders would tour 100 to 150 Assembly constituencies this year to establish connectivity with party workers and voters. The objective of these divisional meetings were to hear the grievances of the common people against the State and Union governments, Mr. Shivakumar said.The Union government had announced a ₹20 lakh crore package to people affected by COVID-19 and lockdown. But a majority of the people in unorganised sectors had not benefited from the package, he alleged.

The party held the Mysusu divisional-level meeting in Bantwal in Dakshina Kannada on January 7.