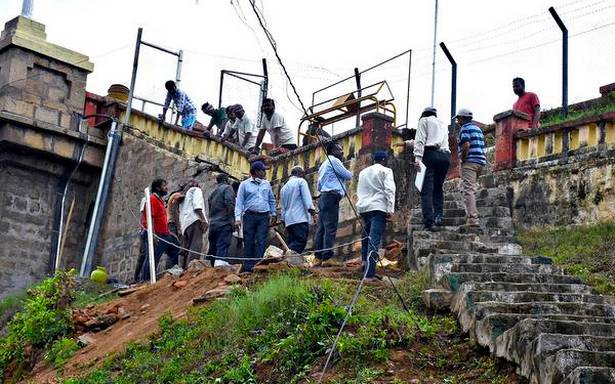 A portion of the pedestrian ramp’s wall at KRS dam was found collapsed. Situated a couple of metres away from the main structure of KRS reservoir, the sloping pedestrian ramp leading to the Brindavan Gardens is separated from the body of the dam by another ramp for vehicles.

Cauvery Neeravari Nigam Limited (CNNL) officials, who were at the spot, sought to allay fears over the safety of the dam due to the collapse, which incidentally comes in the wake of a raging debate over threat to KRS reservoir from illegal stone quarrying in the vicinity.

A senior CNNL official said the pedestrian ramp was in no way connected to the main structure of the dam. “It is 11.5 metres away from the body of the dam,” the official said, emphasizing that the collapsed portion of the wall would have no impact on the dam.

The pedestrian ramp as well as the vehicle ramp had been built around the same time as KRS reservoir, whose construction was completed about 90 years ago in 1932. The pedestrian ramp has not been in much use ever since the authorities barred public entry from the main gate at the southern end.

While the main dam’s structure had been built in lime mortar, the pedestrian and vehicle ramps had been constructed using mud mortar, an official explained. About 25 to 30 stone blocks that comprised the wall of the pedestrian wall had come apart.

Senior officials of CNNL supervised the repair work of the damaged wall with workers restoring the collapsed stone blocks with cement.

The collapse has been attributed to wear and tear, but the rains lashing the region over the last four to five days may have contributed to weakening the strength of the mud mortar used in the masonry work, said the officials.