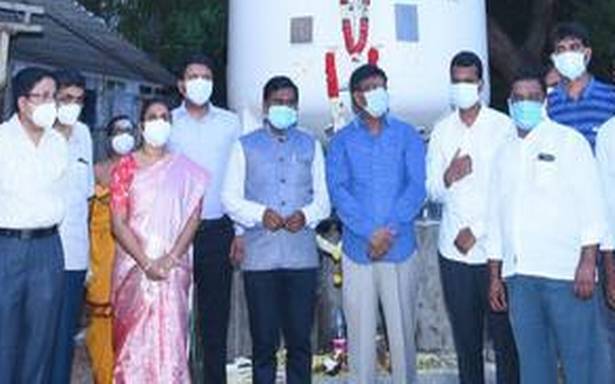 The cause of worry, however, remains the steady increase in the number of COVID patients getting infected with mucormycosis (black fungus).

The GGH alone is treating 89 cases as on Monday, with eight-to-nine patients reporting the infection every day. About 90% of the patients receiving the treatment are COVID positive and about 80% of them have comorbidities like diabetes, as per information.

There were four deaths, but it was not yet ascertained if the cause of death was COVID or mucormycosis.

The hospital superintendent said that the number of patients needing ventilators or an ICU bed had come down for the past one week, but indiscriminate use of Remdesivir and steroids was making them susceptible to the fungal infection.

Meanwhile, the district administration on Monday inaugurated a second Liquid Medical Oxygen storage tank on the Government General Hospital premises with a 10 KL capacity in addition to the existing 13 KL one.

The second one was procured on an emergency basis from the MPLADS funds of Anantapur MP Talari Rangaiah, who formally inaugurated it in the presence of hospital Superintendent K.S.S. Venkateswara Rao, District Collector Gandham Chandrudu and Joint Collector A. Siri.

The officials were also getting prepared for a possible third wave and have readied a 500-bed temporary hospital at Tadipatri next to Arjas Steel and a 300-bed hospital next to the Super Speciality Hospital in the city.