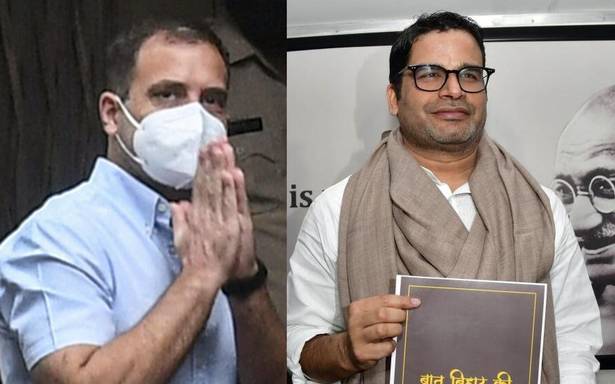 Mr Gandhi’s meeting with Mr. Kishor, who is an advisor to the Punjab Chief Minister, came on a day when Mr. Sidhu had left everyone guessing about his next move by tweeting that Aam Admi Party (AAP) in Punjab understands his “vision and Punjab model’.

“It is clear they know — who is really fighting for Punjab,” Mr. Sidhu had tweeted.

But the presence of Congress general secretary for Uttar Pradesh (UP), Priyanka Gandhi Vadra, also conveyed a sense that the meeting could be about other poll bound States like U.P. and Uttarakhand that go to polls along with Punjab early next year.

On June 16, Ms. Vadra will be making trip to Lucknow and spend three days for an on-the-ground assessment of Congress’ organisation ahead of the 2022 Assembly polls in U.P.

The presence of former Uttarakhand Chief Minister Harish Rawat, who also is the Congress in-charge for Punjab, at Mr. Gandhi’s house along with general secretary (organisation), K.C. Venugopal, added to the speculation that the party could be using Mr. Kishor’s services in all these poll bound States. Mr Kishor has worked with the Congress previously in all these three States.

“In the next three-four days, there will be good news for Punjab Congress,” Mr. Rawat later told reporters outside Mr. Gandhi’s house, adding, however, that Mr Kishor had not discussed Punjab politics nor had Mr Rawat joined the Gandhi-Kishor meeting.

“Rahul ji is a national leader. So many people meet him to discuss important issues. He takes inputs from different people. Prashant Kishor didnt negotiate anything regarding Punjab,” added Mr Rawat.

When reports emerged that regional Opposition could be attempting to isolate the Congress before the 2024 elections, Mr Kishor had commented that no Opposition front without the Congress can be effective against the Narendra Modi-led BJP government.