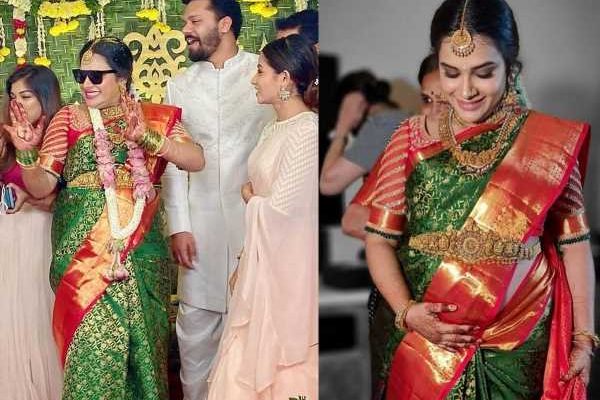 Bigg Boss fame Hari Teja has made a name for herself on the Telugu screen. The popular anchor gained popularity by participating  in the controversial reality show Bigg Boss.  Hari Teja is currently pregnant. She is expecting her first child with hubby Deepak.  In the month of December, Hari Teja had shared a video in which she was seen flaunting her baby bump. On the occasion of traditional ritual of Baby shower, she was spotted with her pregnancy glow. Few celebrities from the film industry had graced the baby shower  ceremony.

Hari Teja was also spotted  dancing on the occasion of her baby shower event and this news is confirmed by her as she shared a video clip on her Insta.

Hari Teja has impressed in many films with her diverse roles as a comedian and character artist In Trivikram Srinivas’ directorial venture A..Aa, she worked as an assistant to Samantha  Akkineni and got very close to the Telugu audience.  Hari Teja, who  tied the knot with Deepak Rao 4 years ago, is eager to enjoy motherhood to the fullest.