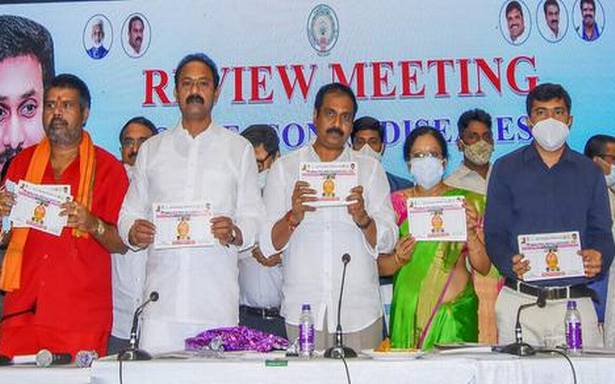 Deputy Chief Minister and Health Minister Alla Kali Krishna Srinivas has advised the officials to prepare plans for the effective implementation of preventive measures to check the spread of seasonal diseases.

Presiding over a review meeting with people’s representatives and the officials at the VMRDA Children’s Theatre here on Tuesday, the Health Minister said that this year like last year, there were good rains and the incidence of seasonal diseases like dengue, malaria and chikungunya was quite high in the Visakhapatnam district, as per the statistics provided by the district officials.

While the incidence of malaria was high in the Agency areas, dengue was more in the Greater Visakhapatnam Municipal Corporation (GVMC) and in the limits of other municipalities in the district. A total of 462 cases of dengue, 708 malaria and 24 chikungunya cases were reported in the district.

While appreciating the officials for their dedication in containing the seasonal diseases, he called for creating greater awareness among people, especially in the tribal areas, so that they prevent stagnation of rainwater around their homes.

Mr. Srinivas called upon District Collector A. Mallikarjuna to prepare special plans for the Agency areas and ensure regular door-to-door campaigns by ASHA and health workers. Doctors should be asked to stay in the tribal areas and organise medical camps, if necessary. He said that the government has improved the infrastructure at the government hospitals during the last two years.

Commending the measures taken by the officials in releasing gambusia fish into drains to check the proliferation of mosquito larvae, he suggested that such measures should be continued to check the thriving of mosquitoes, which were causing various diseases. He also appreciated the plan to distribute five lakh mosquito nets, in places where malaria was rampant.

District in-charge Minister Kurasala Kannababu said that Chief Minister Y.S. Jagan Mohan Reddy had ordered holding of a review meet in Visakhapatnam as the incidence of malaria and dengue was more in the district. He underlined the need for the Medical and Health and Panchayat Raj Departments to conduct a door-to-door fever survey in the district. He called for field visits by the ASHA workers, ANMs, secretariat staff and doctors.

Tourism Minister Muttamsetti Srinivas suggested that the general funds of the panchayats could be used for the control of seasonal diseases. Fogging machines could be used in the villages, where there was high incidence of malaria, by coordinating with the Zilla Parishad CEO, he said.

The Deputy Chief Minister and his Cabinet colleagues released a poster brought out on the occasion.