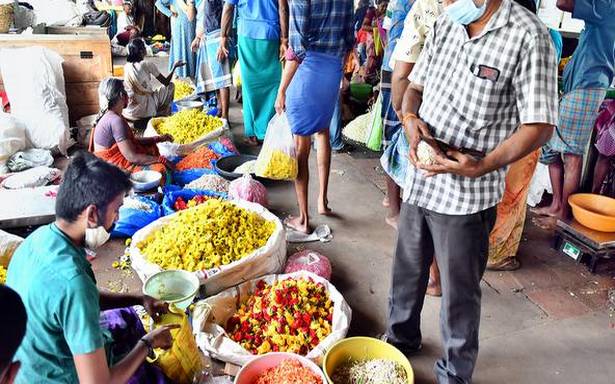 Farmers hit by closure of shrines, lockdown on Sunday

The Tamil Nadu government’s decision for a total lockdown on Sundays and closure of shrines on three days in a week has severely hit farmers as prices of flowers fell n Dindigul on Saturday.

According to a flower merchant Ponnammal at the wholesale market, following the order to close down temples, churches and mosques from Friday to Sunday, the footfall to the shrines had come to a standstill since Friday.

Normally, about 40 metric tonnes of different types of flowers like jasmine, rose, ‘arali’, ‘sampangi’ and among others grown in and around Chinnalapatti, Yagapanpatti, Narasingapuram, Perumal Koil Patti, Adikaripatti and Siluvathur hamlets, arrived here in the market. Merchants from as far as Kerala and Puducherry and other parts of TN procured flowers and transported them by road and rail.

However, after the G.O., the arrivals had sharply dropped to 15 tonnes in the place of 40 tonnes. The price of flowers too dropped by at least 30 per cent to 50 per cent. A farmer Sagayam said that the TN government should compensate and give relief for the losses due to the lockdown. “When things were looking up, the sudden announcement to close down shrines has come as an unexpected development,” he said.

The officials said that the measures had to be taken keeping in mind the rising number of COVID-19 cases in different parts of the State and other locations.

The priority now was to prevent the spread and enhance the inoculation to as many people as possible.