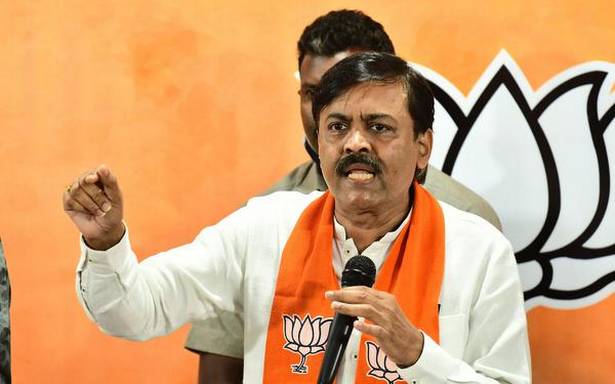 The MP says that the Union government has decided to privatise all manufacturing sectors, except for the four strategic sectors

The privatisation of Visakhapatnam Steel Plant (VSP) is a policy decision of the Union Government and it has nothing to do with any individual case or of a PSU incurring losses or making profits, said BJP MP G.V.L. Narasimha Rao.

Addressing a press meet here on Wednesday, he said, “VSP has not been singled out and the Union Government has decided to privatise all manufacturing sectors, except for the four strategic sectors. Moreover, privatising the PSUs will only be beneficial for the plant and the interests of the people.”

He agreed that VSP might have some sentiments attached to it, but that has nothing to do with the Union Government’s decision, as it applies universally for all the sectors that have been identified for privatisation.

Speaking about the delay in functioning of the new railway zone with Visakhapatnam as its headquarters, he said that he had a detailed meeting with the chairman of the Railway Board and other authorities concerned and has asked them to speed up the work.

He pointed out that the delay was due to the outbreak of the COVID-19 pandemic and some financial losses suffered by the Indian Railway due to the pandemic.

MLC P.V.N. Madhav who was present at the meet informed the media that a detailed discussion was held with the OSD of the zone and the DRM to ensure that efforts are on to expedite the process.

We have also discussed about the Rayagada division issue, which is being opposed by many and efforts are on to sort it out, he said.

Mr. Madhav also said that a number of railway projects are in the pipeline and the much awaited Visakhapatnam-Varanasi train will shortly come into existence.

We have also proposed for five more VistaDome coaches for the Araku sector, he said.

Earlier, lashing out at the functioning of the State Government, Mr. Narasimha Rao said that on the one side they are opposing the privatisation of VSP and on the other side they are floating corporations to sell cinema tickets and fish and mutton.

“The State Government does not realise that by doing so it is going to render traditional fish and meat sellers job less. Moreover, it appears that the government is trying to acquire some more loans by floating these corporations, as it has already gone bankrupt,” he said.

He criticised the State Government for taking credit for all projects and schemes. “The State Government has not spent a single rupee for any of the projects or schemes and all the money is coming from the Centre. Projects such as the Vizag-Raipur and Vijayawada- Bengaluru are fully funded by the Union Government and still the State is trying to stake its claim,” said Mr. Narasimha.

He alleged that many of the projects are being held back, as the State Government is not coming forward to give its share.

“At least 10 such projects, including the proposed industrial corridors such as Vizag-Chennai and Vijayawada- Bengaluru have not made any headway due to the State’s non-committal attitude,” he said.

He also accused the State Government of misuse of the deficit grants and said that out of Rs. 105 to 110 lakh crores that has been earmarked for National Infrastructure Pipeline for the entire country, about Rs. 8.16 lakh crore have been catered for AP, but despite that the government is cribbing for more, said Mr. Narasimha Rao.