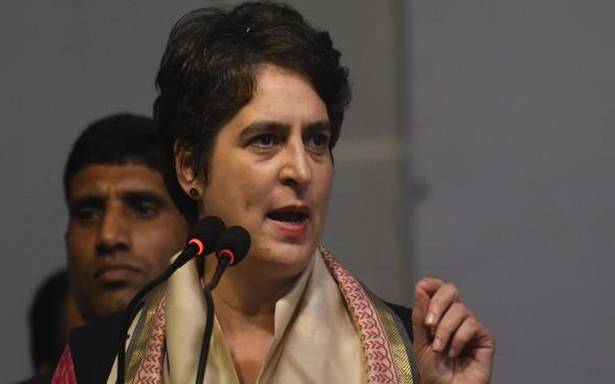 Congress general secretary Priyanka Gandhi Vadra on Wednesday targeted the Yogi Adityanath government in Uttar Pradesh over the gangrape and murder of a 50-year-old woman in Badaun. She said “the Uttar Pradesh government’s intention towards women security is suspect.”

“In Hathras, the government administration did not listen to the pleadings. The government protected officials and suppressed the victim’s voice. In Badaun, the police officer neither listened to the pleadings nor did he examine the place of the incident. The U.P. government’s intention on women’s security is flawed,” Ms. Vadra tweeted.

The 50-year-old woman was gangraped and brutally killed allegedly by a priest and two others on Sunday at a temple complex. While the police claimed to have arrested two persons, the main accused is reported to be missing.

Congress leader Alka Lamba asked if the main accused was being protected by “anyone in the BJP as the police were unable to arrest him.”

“Are BJP leaders trying to save the accused in Badaun like in Unnao and Hathras? Perhaps that’s why the police have not been able to catch the main accused. The victim’s family alleges that police did not reach the spot on time,” Ms. Lamba said.

“We demand that the main accused arrested within 24 hours and a fast track trial conducted to punish the accused,” she added.

The Congress leader also targeted Union Women and Child Development Minister Smriti Irani, who is also an MP from Uttar Pradesh, for being silent on the issue of women security in the State.

“Smriti Irani ji was silent during Unnao incident, didn’t speak when Hathras happened … now, we hope she will speak up,” Ms. Lamba said.