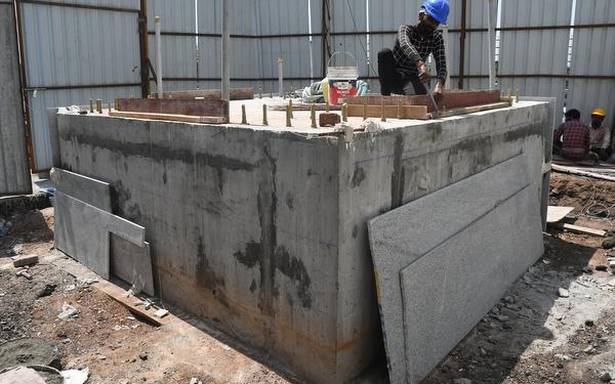 Chief Minister M.K. Stalin is expected to inaugurate it.

The Public Works Department has accelerated work to erect a pillar at the junction of Sivananda Salai and Kamarajar Salai to commemorate the 75th Independence Day.

Though several sites in the city were inspected, the site near the Sivananda Salai-Kamarajar Salai was finalised. Officials of the Public Works Department said the commemorative pillar would be 55 feet tall and an Ashoka Chakra would be erected atop the pillar.

Following a government directive from Revenue and Disaster Management Department, the beautification work is being carried out by P.S.K. Engineering Constructions and Co. at a cost of ₹1.95 crore. Chief Minister M.K. Stalin is expected to inaugurate it.

Officials said the triangular channelising island would accommodate the pillar in such a way that traffic visibility would not be affected. Pedestrian crossing and other road signage would be provided at the junction of Sivananda Salai. Four statues of Indian Army soldiers holding rifles, each five to six feet in height, would be installed at the corners of the island.

K.P. Sathyamurthy, Joint Chief Engineer, PWD (Buildings), and the project committee chairman said nearly 70% of the work had been completed and remaining work would be over in three or four days.