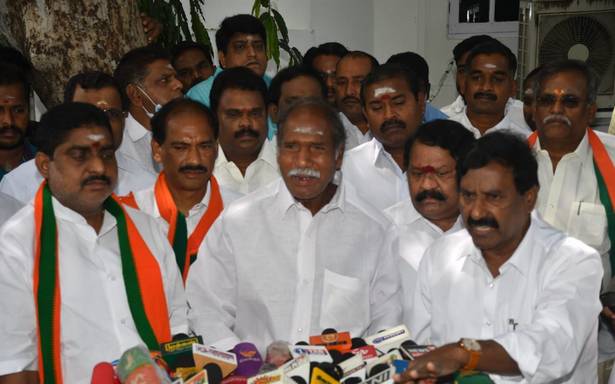 Opposition leader and AINRC founder N. Rangasamy on Wednesday sought the resignation of Chief Minister V. Narayanasamy and his ministers in the wake of resignations by cabinet members and party legislators.

Addressing a press conference along with leaders of AIADMK and BJP, the AINRC chief said Congress has lost majority after the resignations by cabinet members and party legislators. “The Chief Minister has lost the moral right to continue after the resignations. He should resign on his own after losing majority in the house,” he said.

Asked whether they would approach the Lt Governor seeking her direction to prove the government’s majority, the Opposition leader said they would wait to know the response of the government before taking the next step.

Asked whether the Opposition would stake claim to form the government, Mr Rangasamy said “ Let the Congress party take a decision first.”

To a question on Social Welfare Minister M. Kandasamy’s comment that BJP was putting pressure on Congress leaders to resign using Central agencies, the former Chief Minister the Congress legislators resigned as they were disillusioned with the government’s performance.