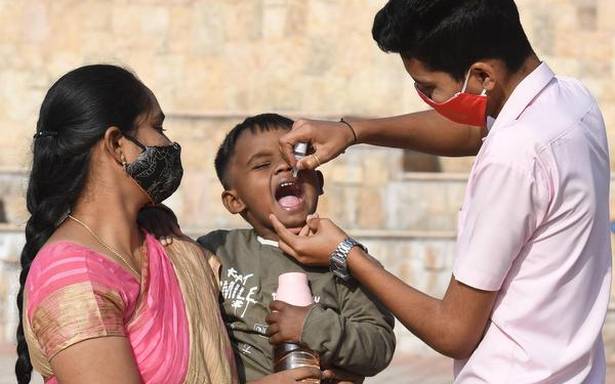 BBMP recorded the lowest coverage in Karnataka at 81.52%

As many as 57,98,611 children aged less than five years were administered pulse polio drops on Sunday with the national campaign recording a 90.5% coverage in the State on Day 1. The target was to administer the drops to 64,07,692 children.

Pulse Polio immunisation campaign was supposed to be held on January 17, but was postponed in view of the COVID-19 vaccination rollout on January 16. Chief Minister B.S. Yediyurappa, along with Health and Medical Education Minister K. Sudhakar, inaugurated the campaign in the city at the CM’s home office ‘Krishna’.

While Udupi district recorded the highest coverage with 99.44%, BBMP recorded the lowest at 81.52% with 8,79,804 of the targeted 10,79,218 children being administered polio drops. Udupi was followed by Mandya district that achieved 97.57% coverage. At least 23 districts recorded coverage of over 90%.

The Health Department had set up as many as 32,908 booths across the State for parents to take their children for polio vaccination. A total of 49,338 teams comprising 1,10,179 vaccinators had been deployed for the drive.

To help tourists, commuters and those in transit, the department had set up vaccination booths with 1,934 transit teams at railway stations, bus stops, metro stations, and airports.

Mr. Sudhakar said there will be a mop-up round from February 1 to 3 for those who missed out on Sunday. For the next three days, vaccinators will make door-to-door visits to administer the drops to children.

“To augment staff for the polio immunisation drive, COVID-19 vaccination has been temporarily suspended till February 3,” he said.