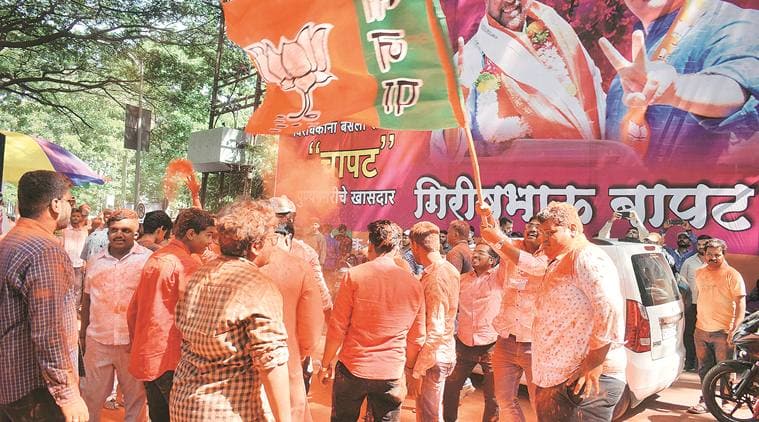 It was all celebrations and a riot of colours at the BJP party office in Shivajinagar since Thursday afternoon, as the leads confirming Pune district Guardian Minister Girish Bapat’s victory started emerging.

Bapat defeated Congress’s Mohan Joshi, even as the counting for Pune constituency was marred by latter’s constant intervention at the counting centre, which caused delay in the counting process as compared to that for the Baramati constituency.

Even before Bapat arrived at the party office, hoardings and huge flexes naming him as MP Bapat sprung up outside the party office and along the roads leading to the office, even before the results were officially declared.

Clad in cream-coloured kurta with blue jacket and sun glasses, Pune’s newest MP greeted his supporters and said his victory was the collective result of tireless efforts of his party workers and MLAs.

“Our victory is solely based on the merits of the many development works promised and delivered for Pune city. People’s mandate and trust rest with the BJP, unlike some parties, which simply offered vague promises and made predictions like weather forecast,” said Bapat.

Admitting that the party was well aware about the current issues, be it farm distress or that concerning employment, Bapat assured that his party will do the needful.

“The party will unitedly take stock of these issues and address these matters in the most effective manner. Problems will keep emerging but we assure to address them from time to time,” said the newly elected MP.

On his immediate priorities for Pune, Bapat said, “Traffic is one of the main concerns for the city and the matter will be considered in the coming months, on top priority.”

On claims of EVM malfunctioning and rigging, another senior BJP leader said that all “these gimmicks” won’t matter now.

Meanwhile, the scene outside the Congress Bhavan was in stark contrast as there was hardly any activity going on since 11am, when the voting trends started getting clearer.

Barring a few volunteers, mostly elderly, who were tracking the election results on the lone TV set in the office of the city party president, there were not many supporters present all through the day.

As the leads confirmed that Joshi was trailing by a large margin, Congress supporters found it hard to digest the party’s dismal performance. “We had worked hard and were hopeful of a better result,” said a party volunteer.

Another volunteer said, “This means that neither demonetisation, GST or farm distress mattered the common man. Our party put up a tough fight, led by Rahul Gandhi, but it seems that we will need to rework our strategies in future.”

As the day progressed, the number of volunteers at the party office shrunk as they had little reasons to cheer. Many party supporters said the party needs to work harder, stressing that the history of Congress and its legacy needs to be narrated to young voters.

However, the only solace that volunteers found was in the positive leads of the Congress’s ally, the NCP.

Post afternoon, the focus of the Congress party office shifted to the growing margins of Dr Amol Kolhe and Supriya Sule, both of whom won comfortably from Shirur and Baramati constituencies, respectively.

“Kolhe’s victory is big and it is a good good sign for Shirur,” said a volunteer.