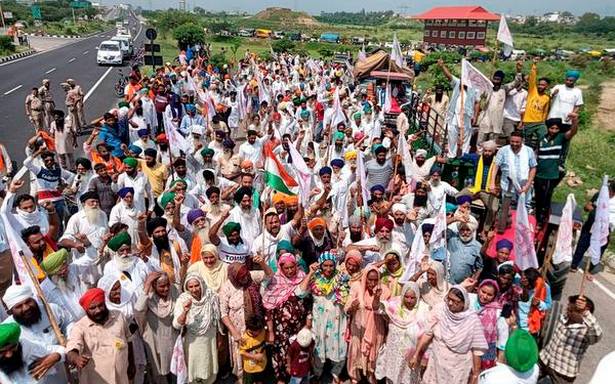 The farmer union of Punjab, that are associated with associated with Samyukta Kisan Morcha, convened a meeting of all non-BJP parties who would be contesting the forthcoming Punjab Assembly elections.

Punjab based 32 farmer organisations that have been at the forefront of the ongoing farmers’ agitation against Centre’s farm laws on Friday asked political parties in Punjab to not campaign in the run to State assembly polls until the Election Commission announces the schedule for the election, which is due early next year.

The farmer union of Punjab, that are associated with associated with Samyukta Kisan Morcha (SKM), convened a meeting of all non-Bharatiya Janta Party (BJP) political parties who would be contesting the forthcoming Punjab Assembly elections. The key parties that participated in the meeting included Shiromani Akali Dal, Aam Aadmi Party (AAP), and the Congress.

The SKM in a statement said the meeting was fruitful and most political parties have agreed with the view of farm unions.

“In the upcoming days, all the political parties will support the farm movement in Punjab. Those who violate the agreement will be considered anti-farmer, and farmers will protest against them as well in addition to protesting against BJP and its allies,” said the statement.

Jagmohan Singh, General Secretary, Bhartiya Kisan Union-Ekta (Dakonda) said “We have asked political parties to not campaign until Election Commission announces the schedule for the polls. The ongoing political campaign activities could defect the ongoing agitation.”

While the Shiromani Akali Dal (SAD) urged SKM to retain the national character of the farmers’ agitation by not imposing any restrictions on political activities in Punjab even as it offered all help to buttress the ongoing agitation on the borders of Delhi – the AAP leaders assured the farmers that the cadre of the AAP shall stand by them in the future as well.

AAP MLA and farmer wing State president Kultar Singh Sandhwan said that since the Aam Aadmi Party was playing the role of the main opposition in the State and the people of Punjab expected change from them it was imperative to reach out to the people through political programs.

SAD leaders Prem Singh Chandumajra and Maheshinder Singh Grewal said “a conspiracy is afoot by the Centre to restrict the farmers’ movement to Punjab and then suppress it by imposing President’s Rule in the State.”

“Our fight is with the BJP at the national level. Political activity has not been restricted due to the farmers’ agitation in any other State in the country. Going to the people is as much your right as ours and this should not be restricted,” they said.

SAD senior leaders Balwinder Singh Bhundur and Daljit Singh Cheema said, “We understand that the farmers’ movement should not be affected at all. We will not hold rallies on any day on which the SKM announces a special programme. We are also ready to support the struggle by sending our cadre to the Delhi border protest sites. The SKM is also free to set a quota for participation from every political party and we will adhere to it.”