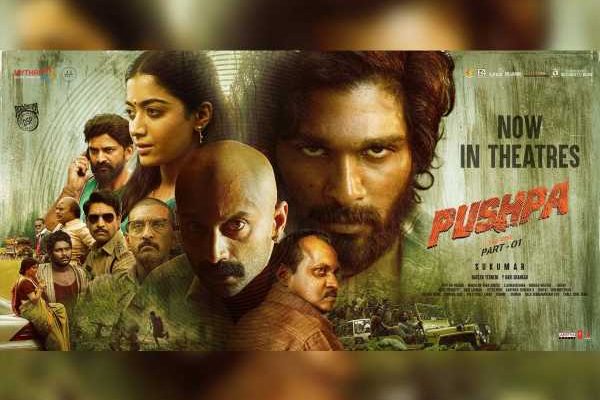 Story: Pushpa Raj (Allu Arjun) is a daily labourer, and he joins hands with Konda Reddy, Jali Reddy and Jakka Reddy. They do illegal smuggling of red sandals.   He faces the threats from Mangalam Srinu (Sunil). How  does Pushpa Raj emerges victorious in this ambitious journey and becomes the kingpin smuggler don of red sandals? What role does his Srivalli (Rashmika Mandanna) play in this? form rest of the story of Pushpa: The Rise.

Performance: Allu Arjun’s performance as Pushpa  in the role of a wicked smuggler,  is good  in this film and his Chittoor dialect is so perfect. The actor gate up, body language, way of dialogue delivery, dancing style, action, dialogue dictations are highlighted. Character of Fahadh Faasil as Shikawat sir is so fiery and scary. Rashmika Mandanna looks cute. She matches equal steps  in the song with Bunny and her chemistry with  him  is superb.   There is not much for Anasuya Bharadwaj  in the first part. Sunil performs well. Rest of the cast of Pushpa perform accordingly.

Technical:   The story of Pushpa:  The Rise is predictable but Sukumar became successful to execute  Pushpa: The Rise in engaging manner. He has written Allu Arjun’ character quite well. Screenplay is good  and the dialogues are highlighted. Songs are eye-catching and foot-tapping. Devi Sri Prasad does good job with its background score that elevates the film well. Samantha’ special song is good. Action sequences are well choreographed. Production values are rich. Cinematography is breathtaking.

Analysis: Pushpa: The Rise is a gangster drama that tracks the journey of the rise of the lead actor.