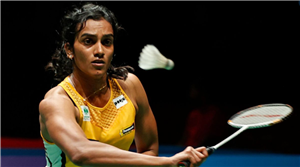 It helps that the sight of the towering Sindhu waiting to tap anything within her massive wingspan can cause some serious visual trouble to the likes of Yamaguchi. PV Sindhu is drawn at the Tokyo Olympics to play against shuttlers who love the destructive dawdle of a lingering brawl. Sending her scurrying after the shuttle to all corners from where she has to defend unendingly, tends to be the general plan against her. The one place where they don’t want her standing in her whole strong, imposing glory measured at 5 ft 11 inch is at the net.

It’s the net where India’s gold medal contender needs to storm, to deprive her opponents of their artistry (Tai Tzu Ying) and audacity (Akane Yamaguchi). And her giant smash ought to be the set-up shot, rather than the point-collecting kill. It’s badminton’s version of serve ‘n volley. But smash ‘n charge the net is Sindhu’s shortest path to keeping rallies short and making her full intimidating frame count.

In Hong Kong’s Cheun Ngan Yi and Denmark’s Blichfeldt as well as home hope Yamaguchi and Taipese Tai Tzu, Sindhu is not likely to meet anyone terribly struggling at defense of her steep cross smashes. But given the quality of defense the Indian will be up against, the smash alone might not finish matters and will need the follow-up at the net. It helps that the sight of the towering Sindhu waiting to tap anything within her massive wingspan can cause some serious visual trouble to the likes of Yamaguchi. The 24-year-old Japanese can be put under pressure with sustained power-plays. .

It’s also the 1-2 combination that Sindhu successfully employed at the 2019 World Championships in the quarterfinals against Tai Tzu Ying, to turn the tide after losing the opening set in what remains perhaps the best match of her life. Not only does it offer options of smart taps and close kills, it can also effectively push Sindhu’s opponents back from the net to between service line and baseline, since they fancy winning the net war of the tight dribble. Desperate scrambling retrievals running backwards are always a possibility, but it puts Sindhu in control of the rally.

The chip ‘n charge was Carolina Marin’s makeover shot at Rio, while India’s male singles player Kidambi Srikanth and even Sai Praneeth and Prannoy to an extent, revel in getting their smash to play a more supporting role, and built the blitzy momentum for the denouement at the net. Sindhu’s strong striding and imposing presence will add the necessary menace needed to build the sort of unbeatable aura that Marin has built for herself.

While Sindhu has admittedly shored up her defense in the pandemic, there’s an attacking anomaly – a twist in the tale. Never quite known for her wristiness, expect drama at the lines. Look out for the strong, powerful slice, straight down the line, which opponents will find tough to cross owing to the angle.The perfect one will be clipped to land just behind the service line. Short, sweet, snappy.