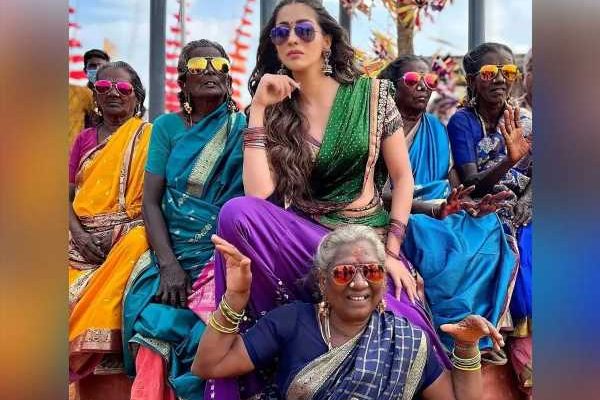 Legend Saravanan and Urvashi Rautela are currently working together for an upcoming film  The Legend. The film The Legend  marks the debut of Saravanan while for Urvashi, who has done many Bollywood films, it will be her first film in Kollywood. Now according to the latest report, the makers of The Legend have approached Raai Laxmi  and she will be seen shaking a leg for the special song which is a folk song.

Raai Laxmi was recently in Chennai to shoot for the song, which has been composed by Harris Jayaraj.  The sources close to the makers revealed that It’s a catchy, peppy kuthu — a traditional folk song, actually. So, the makers wanted to rope in an actress who could do justice to it and they  approached Raai  Laxmi. When she heard the song, she immediately gave her nod.

The folk song been shot on a lavish, colorful set, and it is  choreographed by Raju Sundaram master. It is  a high energy song and has some very complex footwork.

The science fiction drama The Legend is being directed by ad filmmakers JD and Jery.  Initially Vivekh was part of the film, and post his demise, the team brought top comedian Yogi Babu  on the board. The makers are planning to release the movie in five languages — Tamil, Kannada, Telugu, Hindi, and Malayalam.