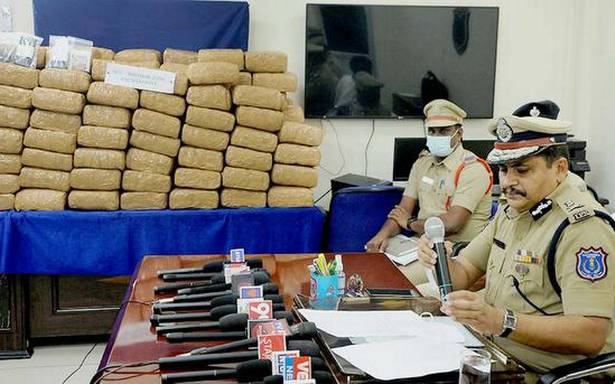 Ramannapet police of Rachakonda commissionerate, along with special operation team from Bhongir, arrested four drug peddlers and recovered 294 kg of ganja from them.

The contraband material, in 147 two-kg packs, was being brought from Rampachodavaram of Andhra Pradesh, for distribution and sale in Hyderabad.

Police Commissioner Mahesh M Bhagwat, explaining the arrest and recovery to media persons on Monday, said the four accused were family members and friends. They hailed from Nalgonda and Nagarkurnool districts. V. Tirupathi, an airport cab driver, took to ganja peddling after loss in business due to COVID-19 lockdowns. He was in 2020 involved in an Excise violation in Kalwakurthy.

Tirupathi had once transported ganja for an unknown man from Maharashtra and earned ₹ 20,000 for the trip. Later, he directly got involved in the business with one supplier Buchibabu in A.P, bought the two-kg packets of ganja at ₹2,000 and sold them in Hyderabad for nearly five times the price, Mr. Bhagwat explained.

They were arrested on Sunday when they diverted their journey towards Ramannapet after observing police checks at Pantangi toll plaza. V. Tirupathi and P. Manktha were riding the SUV with the load and two others – P. Ravinder and V. Kalyan, were in the pilot vehicle.

The four have been booked for violations under the Narcotics Drugs and Psychotropic Substances Act. Search for the suppliers from A.P. — Buchi Babu of Dharakonda and Karam Surendra Dora of B. Velamalakota is on.