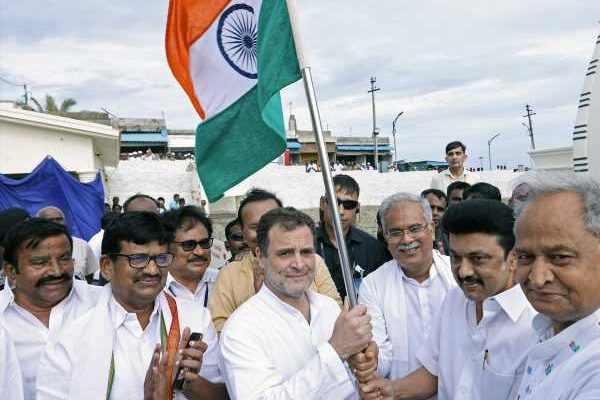 Congress leader Rahul Gandhi on Wednesday flagged off party’s ambitious ‘Bharat jodo’ yatra from Kanyakumari, the coastal town in Tamil Nadu, with an assertion that he will not lose his country to hate and accused the Bharatiya Janata Party-Rashtriya Swayamsevak Sangh of trying to divide the country on religious lines.

Eyeing the revival of the crisis-ridden party ahead of the 2024 Lok Sabha elections, the party chief Sonia Gandhi described the march as a “landmark occasion” and hoped that the march would help rejuvenate the grand old party.

“I lost my father to the politics of hate and division. I will not lose my beloved country to it too. Love will conquer hate. Hope will defeat fear. Together, we will overcome,” Rahul Gandhi tweeted as he paid floral tributes to his father and former Prime Minister Rajiv Gandhi at his memorial in Sriperumbudur, hours before the formal launch of the 3,570 km-long yatra.

Addressing a rally at the launch of the yatra, Rahul Gandhi tore into the BJP, saying, “today every single institution is under attack by the BJP and the RSS… They think they can frighten the opposition using ED, CBI, Income Tax. The problem is they do not understand the Indian people.”

“Indian people do not get scared. It doesn’t matter how many hours of interrogation they do, it does not matter, not a single opposition leader is going to be scared of the BJP,” he said.

Gandhi also alleged that the BJP considered the tricolour as their personal property and said the national flag did not come easily as it was earned by the efforts of all Indians belonging to every religion, region and language.

Asserting that it was not enough to salute the flag but also protect its ideas and values, Gandhi said this flag “guarantees everybody the right to practice every religion, to speak every language that one desires. And today, brothers and sisters, this flag is under attack.”

His attack against the BJP over the national flag came in the backdrop of Prime Minister Narendra Modi’s ‘Har Ghar Tiranga’ campaign last month to encourage people to hoist or display the national flag in their homes. The campaign was part of the government’s ‘Azadi Ka Amrit Mahotsav’ initiative.

Explaining the idea behind the yatra, he said, “it is very important that we bring the people of India together and make sure they are united so that India remains strong. And that is the aim of the Bharat Jodo Yatra which is designed to listen to the people of India.”

Earlier, Stalin handed over the national flag to Rahul Gandhi and both the leaders saluted the tricolour, signifying the broad theme of unity.

Apart from the message of unity, the Congress is seeking to flag economic disparities, social polarisation and political centralisation, while attempting to make gains in what it often described as battle of ideologies through the march that will cover 12 states and two Union Territories that will be covered in 150 days.

At its heart, the ‘Bharat jodo yatra’ is aspirational –hoping to revive the grand old party– as well as political, targeting the BJP and expecting to bring together parties sharing similar concerns about the challenges confronting the country.

Taking a swipe at Congress’ initiative, the BJP dubbed the march as “hollow” and claimed that it was essentially a “family-saving campaign” to keep control of Gandhis over the party and was another attempt to establish Rahul Gandhi as a leader.

BJP leader and former Union minister Ravi Shankar Prasad said Gandhi could not unify his own party, while referring to the recent high-profile exits.

“Essentially, it is a family-saving campaign. The family’s and the party’s political expanse has been shrinking while they face corruption charges. This is not about unifying the country but trying to establish him (Rahul) again as a leader. I would like to know how many times he will be launched and relaunched?” Prasad said.

Earlier in the day, the Congress described the march as a “turning point” in Indian politics and said it marks a “new beginning”.

“September 7 2022. A day when India’s oldest political party will launch the longest padyatra ever undertaken. It is a sombre day, a day for quiet reflection and renewed resolve,” Congress general secretary Jairam Ramesh said in a tweet.

In her message read out at the rally, Sonia Gandhi said she would be participating in the yatra daily in thought and spirit.

“In view of the medical check-ups that I am undergoing, I regret my inability to be with all of you in person ….This is a landmark occasion for our great party with such a glorious legacy — the Indian National Congress. I am confident that our organisation will be rejuvenated,” Gandhi said in her message.

She also described the occasion as a “transformational moment in Indian politics”.

Gandhi congratulated the 120-odd party colleagues who will complete the entire padyatra and said there will be hundreds and thousands of others who will join the march in different states.

Sharma is among the G-23 leaders who had sought an organisational overhaul and elections at all levels, in a letter to the Congress president in August 2020.

The former Union minister also said he was looking forward to joining the yatra when it reaches near his home state Himachal Pradesh, which will go to polls later this year.

In a video message, Priyanka Gandhi Vadra urged people to join the yatra wherever possible.

She asserted the Yatra was needed as “negative politics was being practised in the country and real issues were not being discussed”. It aims to put focus on people’s issues such as price rise and unemployment, she has said.

The Congress has asserted its yatra is not a ‘Mann Ki Baat’, but to ensure people’s concerns reach Delhi.

Rahul Gandhi along with other Congress leaders will embark on the yatra on Thursday at 7 am from Vivekananda polytechnic in Kanyakumari.

The march will move in two batches from 7 am to 10:30 am and from 3:30 pm to 6:30 pm. While the morning session will include fewer participants, the evening session will see mass mobilisation.

The participants plan to walk around 22 to 23 km daily.

About 50,000 citizens have also registered to participate in the yatra. To coincide with the launch of the yatra on Wednesday, prarthana sabhas will be held by the Congress’ state units at 5 pm, a leader said.

At 7 am on Thursday, 10 km foot marches will be held at block level.