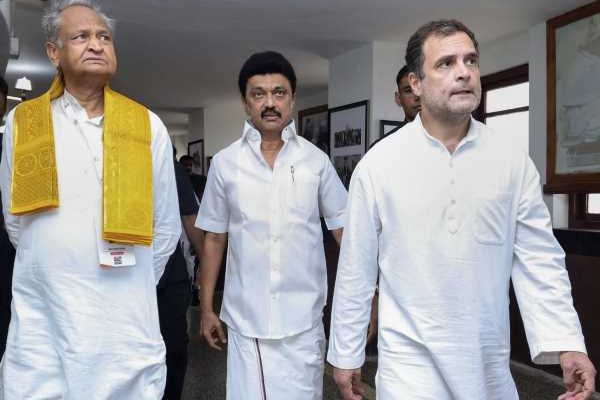 Congress leader Rahul Gandhi, along with several party leaders, embarked on the ‘Bharat Jodo Yatra’ from Kanyakumari on Thursday, marking the beginning of a challenging journey through which the party is seeking to reach out to people and rejuvenate its organisation.

Ahead of the start of the padyatra, Gandhi hoisted the national flag at the campsite of the Bharat Yatris, who will walk with him through the 3,570 km journey from Kanyakumari to Kashmir.

Gandhi began the padyatra from Agasteeswaram in Kanyakumari, along with 118 ‘Bharat Yatris‘ as well as other party leaders from across the country.

Gandhi on Wednesday had flagged off the party’s ambitious ‘Bharat Jodo Yatra’ with an assertion that he will not lose his country to hate and accused the Bharatiya Janata Party-Rashtriya Swayamsevak Sangh of trying to divide the country on religious lines.

Eyeing the revival of the crisis-ridden party ahead of the 2024 Lok Sabha elections, party chief Sonia Gandhi had described the march as a ‘landmark occasion’ and hoped that the march would help rejuvenate the grand old party.

The march would cover 12 states and two Union Territories in about five months.

The participants plan to walk around 22-23 km daily.

About 50,000 citizens have also registered to participate in the Yatra.