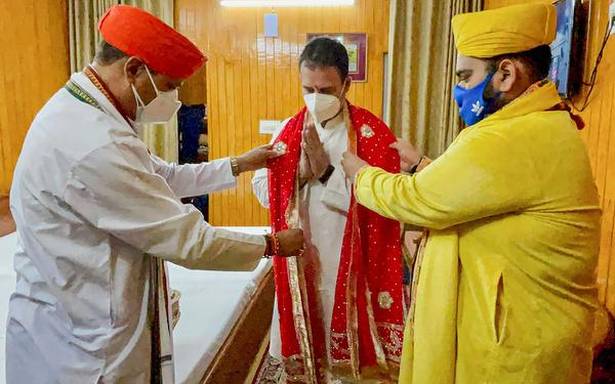 He is scheduled to meet party leaders on Friday

Congress leader Rahul Gandhi on Thursday arrived in Jammu on a two-day tour and paid obeisance at the Mata Vaishno Devi shrine.

Immediately after his arrival at the Jammu airport, he headed for the shrine located in Reasi district, where he walked bare footed on the staircase and attended an ‘Attka Aarti’.

He refused to make any statement saying, “I have come here to offer prayers to the Mata. I don’t want to make any political comments.”

Congress leader Salman Nizami said the people of Jammu greeted the leader with an open heart and offered a warm welcome. “There were joyous scenes here as Mr. Gandhi connects to one and all.”

Mr. Gandhi is scheduled to meet party leaders on Friday. This is his second visit of the Union Territory. He attended a party function in Srinagar on August 9 and 10.