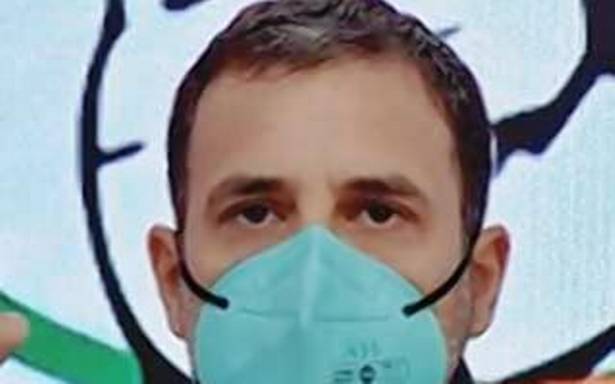 He will visit Kanniyakumari, Tirunelveli, Tenkasi, Thoothukudi and Virudhunagar districts

Congress MP Rahul Gandhi will visit Tamil Nadu at the end of February, his third visit to the State in two months, ahead of the Assembly election.

Mr. Alagiri said Mr. Gandhi will meet farmers, industrialists, micro, small and medium enterprise entrepreneurs, fisherfolk and students during the tour. He will address public rallies during the visit, he said.

On BJP State president L. Murugan’s comment that the upcoming election will be a fight between patriots and anti-nationals, Mr. Alagiri asked: “Who are the anti-nationals? Who are the patriots? From 1885, Indian National Congress leaders, led by Mahatma Gandhi, fought against the British and got Independence for our country. Did the Hindu Mahasabha or the RSS do even a small bit in this fight for Independence?” Mr. Alagiri questioned if any of the Jan Sangh or BJP leaders had taken part even in one protest against the Britishers and gone to jail for that.

He further said unlike Mr. Gandhi who is mingling with the people, Prime Minister Narendra Modi was not visible to the common public during his visit on February 14 and was stuck behind his security cordon and stayed inside his vehicle.

Mr. Alagiri also condemned the hike in the price of cooking gas that has now touched ₹785 per cylinder. “In the last eight months, the price of one cylinder has been increased by ₹220. Due to this, lakhs of women in households are going to suffer. The price of all commodities and essentials will go up,” he said.

He further pointed out that in 2014, under the UPA regime, the price of one cylinder was ₹412 and had since risen by ₹373 in the last six years.

He said the Congress’ demand for the inclusion of the seven sub-sects of the Devendrakula Vellalar community under one name was finally victorious, though delayed.

He alleged that the farm loan waiver announced by Chief Minister Edappadi K. Palaniswami was done in a biased manner.