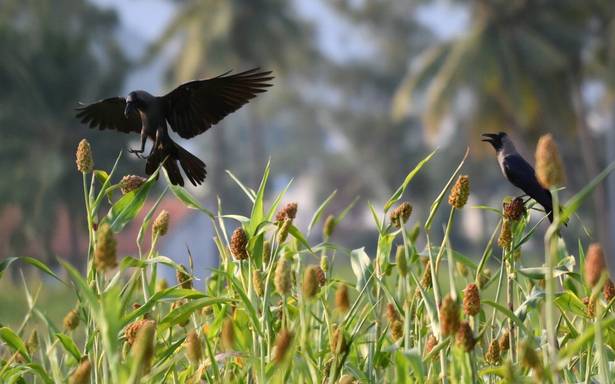 Jhalawar residents told to stay away from pet birds to prevent transmission of disease to humans.

After the mass death of birds, the Rajasthan government has sounded an alert and established a State-level control room here to monitor the avian influenza situation. The National Institute of High Security Animal Diseases in Bhopal has confirmed that crows in Jhalawar had died because of bird flu after testing samples.

Principal Secretary (Animal Husbandry) Kunji Lal Meena said here on Tuesday the samples had tested positive for the A/H5N8 strain. Crows comprised the majority of over 530 birds — heron and baya weaver being the others — which died during the last one week.

The deaths, first reported in Jodhpur and Jhalawar, have occurred in 15 districts after which a one-km area in Jhalawar town was declared a “zero mobility zone” along with the imposition of prohibitory orders elsewhere. Mr. Meena said though no poultry deaths had been reported so far, the administration had started taking preventive measures.

The Forest Department has sounded an alert about the possibility of the spread among the migratory birds staying and foraging in several water bodies. Samples are being collected from the wetlands such as the Keoladeo National Park in Bharatpur district and the Sambhar Salt Lake near Jaipur. Rajasthan has six notified wetlands and over 50 others.

Mr. Meena said the carcasses were being disposed of in a scientific manner and the sick birds were being treated under the supervision of the Animal Husbandry and Forest departments. Rapid response teams have also been constituted to keep a watch and render immediate assistance.

While no infection was found among the fowls reared in poultry farms for eggs and meat, the Jhalawar administration has advised people to stay away from pet birds such as parrots and pigeons to prevent the transmission of the disease to humans.

A group of experts appointed by the Animal Husbandry department will meet the poultry farm owners in Ajmer district and visit the Keoladeo National Park and the Sambhar Salt Lake. The world-famous Sambhar Lake had witnessed the death of over 18,000 migratory birds in November 2019 because of avian botulism, an illness which affects the nervous system and causes flaccid paralysis in legs and wings.