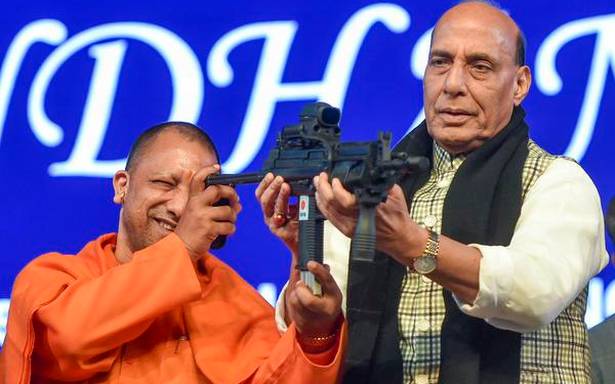 Lavishing praises on Uttar Pradesh Chief Minister Yogi Adityanath, Defence Minister Rajnath Singh on Friday said no one can cast doubts on his honesty and that mere mention of his name gives criminals the shivers.

He said Mr Adityanath is walking on the path shown to him by his religious guru.

Describing Mr Adityanath as a personality who can play multiple roles, Mr Singh said he is working for strengthening both ‘sanatan dharma’ and the state.

Underlining that there should be proper law and order to ensure development, Mr Singh said, "Criminals start shivering on hearing Yogi’s name and their hearts start beating fast." "No one can doubt Mr Adityanath’s honesty, even if they are sleeping," he said.

Mr Singh also hailed Prime Minister Narendra Modi for his strong leadership and said after consulting him, he has given instructions to armed forces personnel not to initiate any attack but to give befitting reply to any instigation from other countries.

Speaking at the event, CM Adityanath hailed Singh and said that working along with Prime Minister Modi, he has strengthened the security of the country.