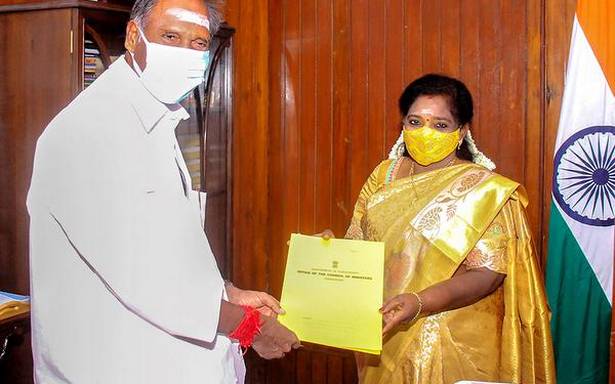 After dissension among the principal allies over sharing of power played out over seven weeks since Puducherry’s first NDA government was elected to power on May 2, Chief Minister N. Rangasamy submitted the list of the Council of Ministers to Lt. Governor Tamilisai Soundararajan on Wednesday. The AINRC and the BJP were unable to come to an agreement on sharing of Cabinet berths all these weeks.

Mr. Rangasamy, who had all along been keeping the allies and close aides guessing on the composition of his Cabinet, met the Lt. Governor at Raj Nivas to hand over the list.

When approached by mediapersons as he emerged from the meeting, the Chief Minister declined to disclose names merely stating that it will be known in due course.

The convention is for the Lt. Governor to forward the list to the Union Home Ministry, which would seek the President’s nod.

An approval from the high office would clear the way for the Lt. Governor to schedule a swearing-in ceremony.

Meanwhile, the Lt. Governor said the Cabinet headed by Chief Minister N. Rangasamy is scheduled to be sworn in on June 27.

Addressing the media after handing over donated COVID-19 relief material to the Health Department, Ms. Soundararajan said the event would be held in the afternoon on that day.

On the list of the Council of Ministers submitted by the Chief Minister, the Lt. Governor said it had been sent to the Centre, and it had to go through several stages of approval.

Meanwhile, a delegation of BJP MLAs and leaders called on Mr. Rangasamy and sought his blessings. The leaders, including A. Nammasivayam and Sai Saravanan Kumar — who BJP sources said were the Ministerial choices — urged him to hold the swearing-in of the Cabinet on June 27.

There was no official word on the ministerial choices from the AINRC camp.

“At this point when the list has formally been submitted, why it should be kept a secret is a bit hard to comprehend,” a party functionary said.

BJP legislator Embalam R. Selvam, who was elected unopposed as Speaker on June 16, recently stated that once the Cabinet is sworn in, a session of the Assembly would be convened to elect the Deputy Speaker.

Since Mr. Rangasamy assumed office on May 7, the constitution of the Cabinet had been delayed due to the bitter wrangling between the BJP and the AINRC over the post of Deputy Chief Minister, Speaker and ministerial berths.

Mr. Rangasamy’s hospitalisation for COVID-19 in the second week of May only compounded the delay. Even as he was out of action for a couple of weeks, the BJP snagged all three nominated legislator posts, much to the chagrin of Mr. Rangasamy. Perhaps, as a sign of his displeasure over this, Mr. Rangasamy chose to remain aloof to the BJP’s moves for negotiation after he recovered and resumed office.