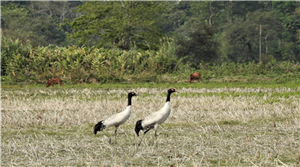 Often associated with peace and luck, the Black-necked crane is central to Buddhist mythology and culture. 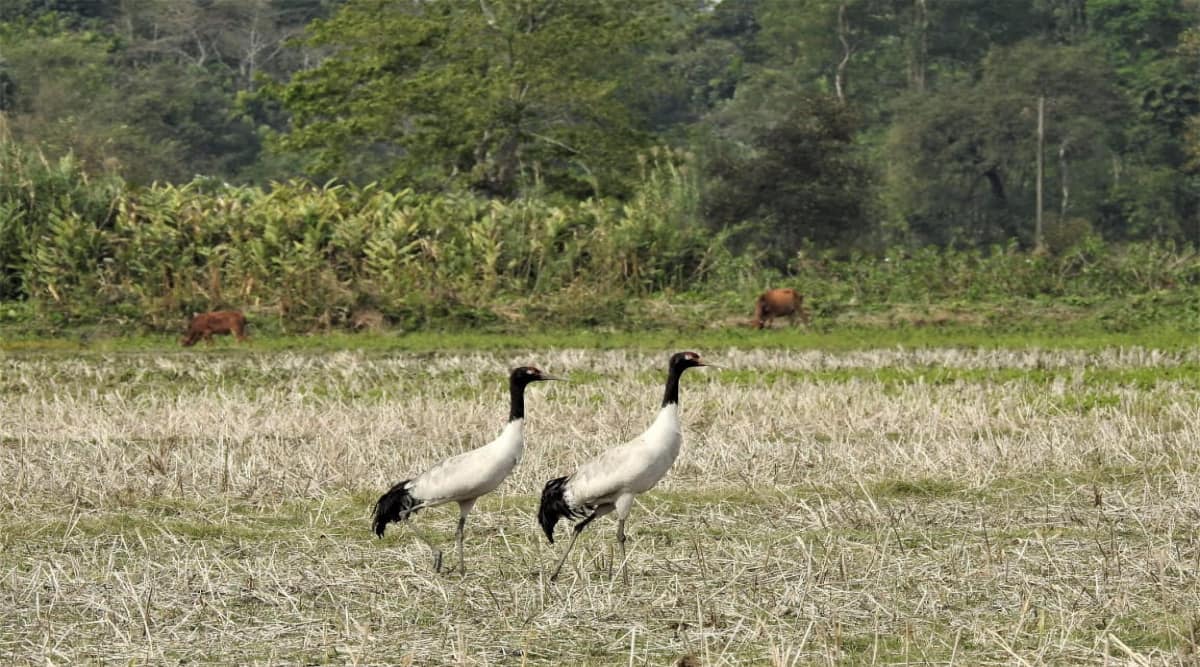 When Tiken Ray first saw the pair, they were walking across a paddy field in the outskirts of Assam’s Manas National Park, in the company of a lone cow. “Even at a distance they looked large, but when I went closer, one of them stretched its neck and that made it look even taller,” said the 34-year-old villager associated with the Wildlife Trust of India, “It looked so spectacular, my first instinct was to protect it.”

On Wednesday, Ray alerted bird researchers he knew, and on February 18, a team, comprising Nilutpal Mahanta of Gauhati University, naturalist Pranjal Sarma and bird watcher Indrani Adhyapak, confirmed that they were a pair of Black-necked cranes (Grus nigricollis), native to the Tibetan plateau, and sighted for the first time in Assam. “This is not to say the bird has not come here before,” said ornithologist Dr Anwaruddin Choudhury, “But even if it has, no one has spotted it.”

The bird researchers believe the pair — possibly a male and female, about 130 cm tall — strayed into the Chaurang village under the Panbari range of the national park.

“These are threatened, high altitude birds, and usually not seen in such low altitude places,” said Mahanta, “So naturally we were amazed and wondered what brought them here.”

Often associated with peace, the Black-necked crane is central to Buddhist mythology and culture. According to a World Wide Fund for Nature (WWF) blogpost, legend says “previous incarnations of the Dalai Lama were carried from monastery to monastery on the backs of these holy birds.” Yet, in more recent times, the bird has been a victim to the pressures of development (wetland degradation, loss of habitat, overgrazing) and is now listed in Schedule I of Wildlife (Protection) Act 1972. In 2020, a re-assessment of the crane’s population led its status to change from Vulnerable to Near Threatened on the IUCN Red List.

While the maiden sighting in Assam has caused cheer among the bird watchers, Ray initially had some anxieties about its safety. “The first reaction of a few villagers was to capture the bird,” he said, “These are really big, and different looking – naturally they would be intrigued by it.”

However, over the last week Ray has started increasing awareness about the bird. One way to do that was by giving the bird an Assamese name —“Deu Korchon” (Deu means god and Korchon means crane). “We told them how the bird is considered auspicious in Arunachal Pradesh, that this is a devta sorai (godly bird). Now, many would think again before harming it,” he said.

Mahanta said that it was thus named in consultation with local villagers and the headman. “It did not have an Assamese name, and now since it’s in Assam, we thought of one,” he said.

While Ray saw it in February, a bird photographer in Barpeta, Imran Ahmed, saw it in January itself. While the high altitude wetlands of the Tibetan plateau (Tibet, Qinghai, Xinjiang, Gansu), Sichuan (China), and eastern Ladakh (India) are the main breeding ground of the species, the birds spend winter at lower altitudes. “But never this low,” says Dr Choudhury, adding that it was recorded in the plains of North Bengal long back. “Some of them visit the Sangti and Zimithang valleys of Arunachal Pradesh,” he said. The Buddhist Monpas refer to them as Trung-Trung Karmo there, and in Bhutan.

Among its other characteristics, environmentalists remember the bird for its role in helping stop a dam project a few years ago. In 2016, the National Green Tribunal suspended the environmental clearance given to a proposed hydropower project in Tawang district after conservation organisations reached out to them highlighting how the dam, if built, would jeopardise the crane’s habitat.

“Seeing it in Assam is special because it is a rare bird – it does not have a very widespread distribution,” said Dr Choudhry. With what we can hope becomes (or may already be) a regular visit, Assam now adds one more uncommon avian species to its list.