Prasad’s comments came at a time when India slipped by ten positions in the world competitive index report, and government data on Friday revealing that factory output has shrunk by 1.1 per cent in August. 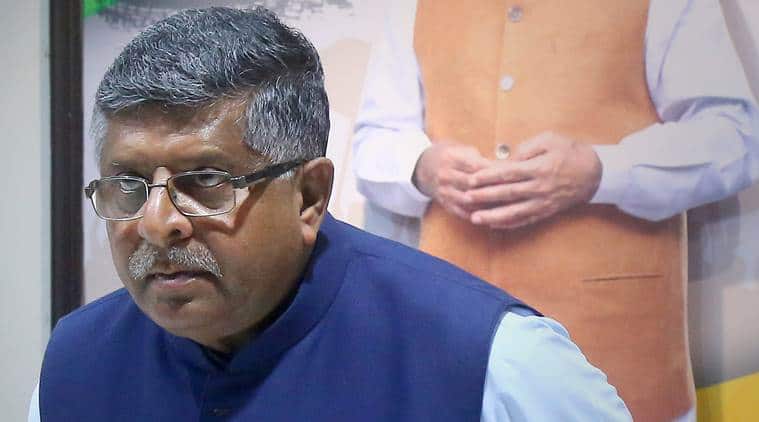 Union Law Minister Ravi Shankar Prasad on Saturday pointed to the success of three movies released on October 2, stating that it suggested that the economy was in sound condition, and claimed that a recent IMF report on India was “incomplete”.

Prasad said, “In former Prime Minister Atal Bihari Vajpayee’s government, I held the portofolio of Information and Broadcasting minister. I am fond of movies. On October 2, three movies were released. The film critic Komal Nahata informed me that the collection on day one was Rs 120 crore. It reflects the public mood and a sound economy.”

When asked to comment about IMF managing director Kristalina Georgieva’s remarks about a slower growth in 2019, especially in India and Brazil, Prasad said, “The measurement of IMF about India is still incomplete. And do not forget, India was on the 11th position when Manmohan Singh was in power; today it is the fifth largest. We have surpassed even France.”

The minister added, “Electronic manufacturing, the Information and Technology sector, Mudra loan, commerce services are performing very well. We never said that we will give government jobs to everyone.”

“There are some people who have organised against the government and misleading people over unemployment,” he added.

Prasad’s comments came at a time when India slipped by ten positions in the world competitive index report, and government data on Friday revealing that factory output has shrunk by 1.1 per cent in August — the poorest performance in seven years due to a sharp decline in production of capital goods and consumer durables.

Commenting on the world competitive index report, Prasad said, “Look at innovation, start-ups and market size parameters, we are improving. It is true that we have dropped on some other parameters.”

The Union minister also said that any attempt by terrorists to perpetrate an attack in India would be dealt with befittingly. “When Pakistani terrorists attacked Mumbai in 2008, the Centre and the state looked utterly helpless. There was desperation. The then Union home minister (P Chidambaram) came and said ‘sorry Mumbai’. Now, the same minister minister is lodged in jail.