In an attempt to revive the tourism, hospitality and aviation sectors, the government has already announced that the first five lakh foreign tourists will be issued visas free of cost. 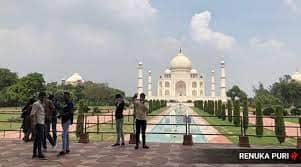 As India looks to restart tourist visas and allow international tourists after a gap of one-and-a-half years, “reciprocal tourism” may be the way forward, according to sources in the Ministry of Tourism.

On Wednesday, while addressing the Global Covid Summit hosted by US President Joe Biden, Prime Minister Narendra Modi had said, “We also need to focus on addressing the pandemic’s economic effects. To that end, international travel should be made easier through mutual recognition of vaccination certificates.”

In an attempt to revive the tourism, hospitality and aviation sectors, the government has already announced that the first five lakh foreign tourists will be issued visas free of cost. The e-tourist visa has been suspended since March 2020.

The free visa will be issued till March 31, 2022, or on a first-come-first-serve basis, whichever is earlier. Even as the total financial implication of this move will go up to Rs 100 crore, officials in the Tourism Ministry say the footfall and revenue boost as a consequence of this monetary exemption will offset any such losses. Also, there has been a lot of pressure from stakeholders in the tourism industry since the sector has been hugely hit due to the pandemic and restrictions.

India is also buoyed by the dip in Covid cases and a higher number of adults receiving the first dose. A few countries in Europe, the US, and tourist destinations such as Maldives and Sri Lanka have already opened their borders for vaccinated Indian travellers.

But with the UK expressing doubts over India’s vaccine certification, sources say the line to be taken by India will now be “reciprocal”. It was in this context that the Prime Minister had insisted upon mutual recognition of vaccination certificates.

Officials say the opening up is expected to be phase-wise to gauge the response and implications, if any. “Deliberations are on — when to open, how to open, and for whom. Keeping in view low infection rate in the country and vaccination status, calibrated opening is being contemplated,” said a senior official, adding that they were expecting a complete reopening by January 2022.