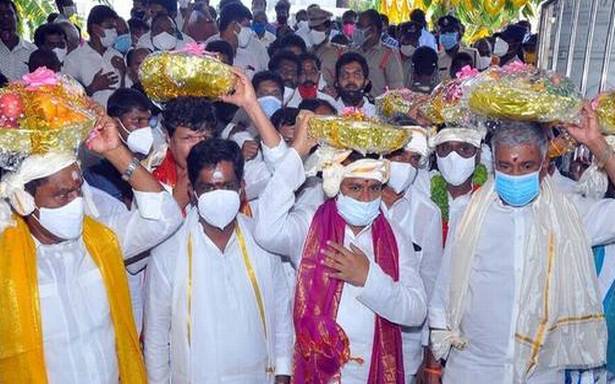 Endowments Minister V. Srinivas Rao on Wednesday performed ‘bhumi puja’ and foundation-laying ceremony for the reconstruction of the Kanipakam temple, near Chittoor. It is the third prominent temple in Chittoor district after Tirumala and Srikalahasti.

He reiterated that the State government was committed to protecting the sanctity of Hindu temples and interests of the devotees.

Earlier, the Minister along with Deputy Chief Minister K. Narayanaswamy, Panchayat Raj Minister P. Ramachandra Reddy took part in the special rituals before launching the reconstruction works.The temple authorities said devotees would be allowed to have darshan through the Balalayam (temporary arrangement) on the temple premises, in strict adherence to COVID guidelines. Puthalapattu MLA M.S. Babu and senior officials of the department and mandal officials of Puthalapattu, Irala and Tavanampalle were present.