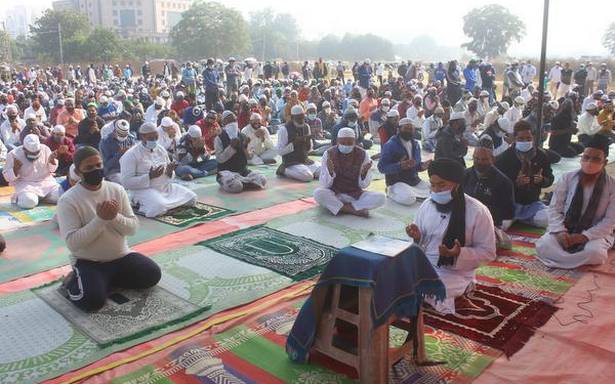 In the past some months, members of some Hindu outfits have objected to Friday namaz prayers

A right-wing group disrupting Friday namaz being held in the open here on December 19 asked Muslims to "reconvert" and pray in Hindu temples.

Ancestors of a majority of Haryana Muslims belonged to Hindu community, said Mahaveer Bhardwaj, chairman of the Sanyukt Sangharsh Samiti, a body of 32 right-wing Hindu outfits.

"We can organise a mass ‘ghar wapsi’ in Leisure Valley here and they will be taken back in their castes and accepted with open arms," Mr. Bharadwaj said.

"They will have their temples to pray and this namaz issue will end," he added.

In the past some months, members of some Hindu outfits have objected to the offering of "namaz" by Muslims in open spaces.

They have been raising "Bharat Mata Ki Jai" and "Jai Shri Ram" slogans to disrupt the Friday prayers by Muslims.