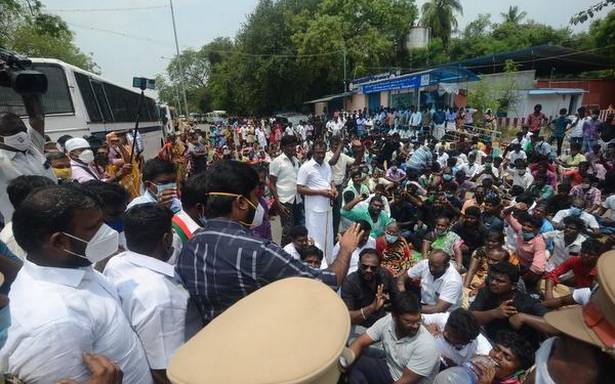 Relatives and members of various Dalit outfits blocked the road in front of Palayamkottai Central Prison on Friday protesting the killing of a remand prisoner on the jail premises on Thursday by a few inmates and demanding registration of a murder case against prison authorities for failing to save him.

When P. Muthu Mano of Vagaikulam near Moontradaippu in the district, who was arrested on April 8 along with three of his associates for an attempt to murder two brothers from another community near Kalakkad, was brought to Palayamkottai Central Prison along with his accomplices from Srivaikundam sub-jail, he was attacked by a group of inmates.

As Muthu Mano sustained grievous head injury, he was rushed to Tirunelveli Medical College Hospital, where he died.

Perumalpuram police registered a case against Jacob, Ramamurthy and Maharajan of Thazhaiyoothu, Madasamy and Kumar of Pallikottai and Kannan and Arunkumar of Velloor near Srivaikundam for allegedly murdering Muthu Mano, against whom a few cases are pending.

Demanding registration of murder case against the prison authorities who “colluded with the murderers”, relatives of the deceased and members of various Dalit outfits staged a demonstration in front of the prison and then blocked Tirunelveli–Nagercoil Highway. They also demanded ₹1 crore compensation to the victim’s family.

Even though Tirunelveli Superintendent of Police N. Manivanan, Tenkasi SP Suguna Singh and Tirunelveli Sub-Collector Siva Krishnamurthy held talks with the agitators, they insisted on the Collector’s presence in the talks.

Collector V. Vishnu came to the spot in the afternoon to hold talks with the protesters. Along with the Collector, District Revenue Officer A. Perumal and Mr. Manivannan participated in the talks.

The protesters said the State government should give employment to a family member of the deceased. They also demanded that post-mortem of Muthu Mano’s body be conducted in the presence of an advocate nominated by the affected family and a family member. They further demanded a special probe to investigate the murders with caste overtones in the past eight years.

Mr. Vishnu, while agreeing to recommend to the government for job and compensation, said registration of case against the prison officials would be possible only after the probe by the Judicial Magistrate was over.

The protesters withdrew the protest in the evening. However, they did not receive the body, saying they would form a coordination committee to decide on the future course of action.