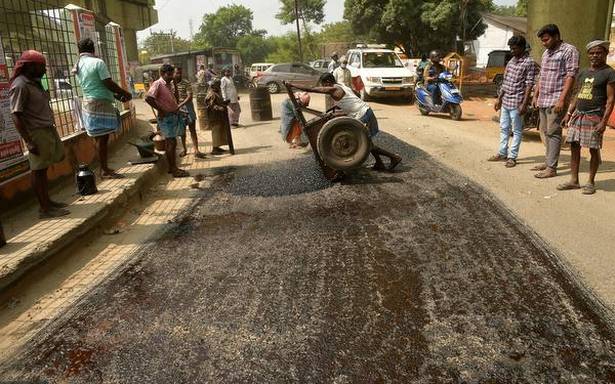 The State Highways Department has started carrying out repair works on the rain-damaged roads in the city.

Patchworks are currently being carried out on roads under the control of the department in the city and its outskirts. “We have already carried out repairs on the city stretch of the Dindigul Road between Railway Junction road overbridge (ROB) and Koraiyar bridge. Work is under way to fill potholes on service lanes beneath the junction ROB. Repairs on another stretch of road from Koraiyar and beyond will be taken up shortly,” an official said.

The city stretch of Dindigul highway had suffered much damage following the monsoon rain as the floodwaters had flowed across the road at several stretches.

The repairs are being taken up by the department as part of the regular maintenance works. “Only now the rain has abated. Within the next 10 days, we will ensure that there are no potholes on roads under our department within the city and its outskirts,” the official said.

Meanwhile, the Tiruchi Corporation has also begun carrying out repairs on the rain-damaged road in the city. Repairs were being carried out on Bharathidasan Salai since Thursday night. The works are expected to go on in other parts of the city over the next few days.