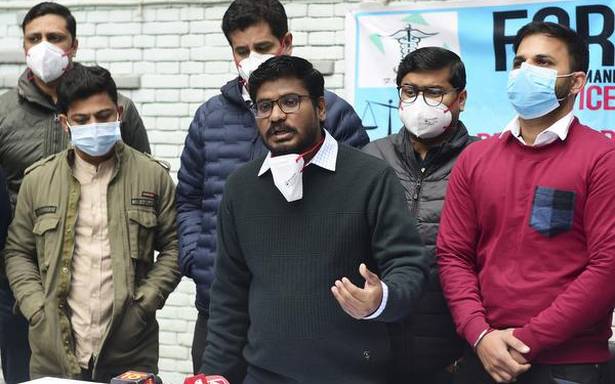 Resident doctors in Delhi, who have been protesting over the delay in NEET-PG counselling for two weeks, on Friday called off their strike and resumed services after receiving assurances from the government that their demands would be looked into, their federation said.

The stir by the Federation of Resident Doctors’ Association (FORDA) was called off at 12 noon, it said in a statement.

FORDA president Dr Manish Nigam said the agitation was carried out by "overworked and exhausted" doctors, and after getting some assurances from the central government, the strike was called off this afternoon and doctors resumed work at their respective hospitals.

"We have lived under great stress over this period, but the common cause and support of doctors kept us going," he said.

Patient care was affected at several major hospitals in Delhi in this period as resident doctors were boycotting services to lodge their protest.

In its statement, FORDA claimed that the Union Health Minister Mansukh Mandaviya has agreed upon some key points in connection with the agitation.

He has agreed that the health ministry will submit the committee report to the Supreme Court of India before January 6, and will publish the NEET-PG 2021 counselling schedule following the court hearing on January 6, the statement said.

The ministry has regretted the alleged "brutal incident of violence" by Delhi Police against several resident doctors who were protesting peacefully on December 27, it claimed.

The statement said that "no punitive or disciplinary action will be taken by the authorities" against any resident doctor who took part in the agitation that initially had started from November 27, has also been agreed upon.

On December 9, the resident doctors had said they were suspending the agitation, called by the FORDA, for a week following the health ministry’s assurance to expedite court hearing and subsequently fast-track the counselling process.

They had then resumed their stir from December 17 after a week-long gap.

"The plight of overburdened and exhausted resident doctors seems to have fallen on deaf ears of the authorities who do not seem to be concerned about the shortage of healthcare workforce due to non-admission of fresh batch of resident doctors," FORDA had written to Mr Mandaviya days ahead of resuming the strike.

Protests by a large number of resident doctors on Monday had taken a dramatic turn, as medics and police personnel had faced off in the streets, and both sides had claimed that several persons had sustained injury in the ensuing melee The federation on Thursday had held protest in the campus of Lady Hardinge Medical College, and also sought withdrawal of police cases lodged against some of their colleagues in the fraternity after the face off between the resident doctors and police personnel.

On Thursday, a "series of meetings of FORDA representatives was held with multiple Delhi Police officials. It was highlighted by Delhi Police that they have highest regard for doctors," the federation said in its statement.

They also assured that police complaints lodged against resident doctors "will be taken care of as per the legal procedures," FORDA claimed.

"A virtual meeting of FORDA members with all RDAs’ representatives was convened late in the evening whereby all the proceedings were conveyed, all points of concern were discussed in details. It was unanimously decided to call off the agitation on 31st December, 2021, 12:00 pm, considering various factors, including patient care," it said.

It was also decided that a national meeting with all RDAs’ representatives will be convened by FORDA on January 6, it added.

FORDA in a separate statement, also thanked members of the media fraternity for highlighting the crucial issue.

Amid the ongoing protest by resident doctors in Delhi, Chief Minister Arvind Kejriwal on December 28 had written to Prime Minister Narendra Modi to look into ways to "personally resolve" the issue, as he had asserted that doctors should be in hospitals not streets, when the coronavirus cases are rising again.

In his letter, he had also urged the prime minister to ensure that the NEET-PG counselling process is expedited.