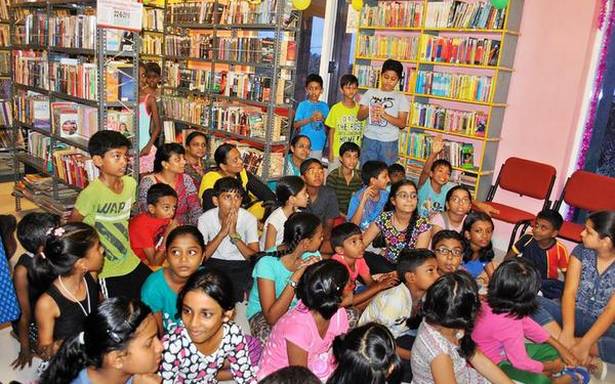 “Satish from Easwari Lending Library brought some shelves and stacked them with books, in a crammed space and we were some 8 to 10 volunteers trained to run the library,” says Deepa Som, a volunteer.

A small membership fee was charged initially. It took just a month for the initiative to catch on.

“Over 100 members had sought membership, and 80% of them were children. We were surprised as we had expected senior citizens and homemakers to patronise the library. With children coming to read, their mothers would also join them,” says Deepa, a mother of a 13-year-old girl who values reading through books.

First, resident-volunteers performed the functions of a librarian which include scanning the barcode and feeding details into the system. With membership mounting, the Association hired a person to run the space, and also waived off the membership fee.

During the pandemic, except for a short period when the government mandated that all common amenities be closed, the doors of the library have always stayed open.

“Due to COVID-19 and cost-cutting measures, we run the library. Going forward, I feel it is better to have resident-volunteers run it as the involvement is greater,” says Deepa, adding that volunteers organise a reading challenge every summer and other activities including storytelling. A book is maintained for residents to pen down a wish-list of books they want to read, and this is shared with the lending library.