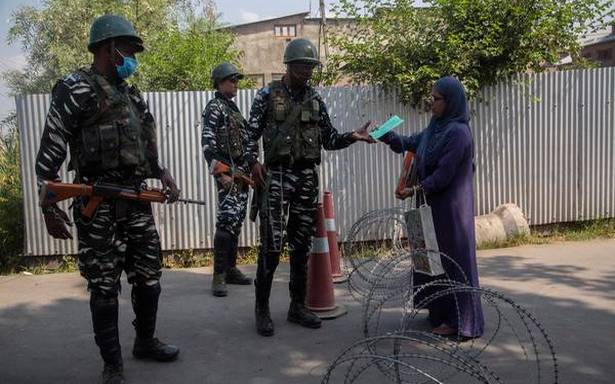 This is the fifth consecutive day of restrictions imposed in the city after the death of separatist leader Syed Ali Shah Geelani.

Normal life remained affected for the fifth day on Monday as authorities imposed restrictions in parts of the city to prevent exhumation of separatist leader Syed Ali Shah Geelani’s body from the Hyderpora graveyard for burial in the Eidgah Martyrs’ graveyard in old city.

"Restrictions have been imposed around Hyderpora and Eidgah areas of the city as a precautionary measure," officials said. The officials said there were inputs that miscreants might attempt to exhume Geelani’s body for burial at the Eidgah graveyard where many militants and two top separatist leaders — Abdul Gani Lone and Mirwaiz Mohammad Farooq — are buried.

Geelani had expressed his desire to be buried at the Eidgah graveyard, according to a statement issued by separatists in February last year.

The 91-year-old died at his home here on Wednesday night.

Officials said all roads leading towards Eidgah and Hyderpora have been barricaded and drones used for maintaining overhead vigil around these areas. They said CCTV cameras have already been installed at the Hyderpora graveyard where Geelani was buried on Thursday.

Elsewhere in the city, normal life was affected due to the restrictions as markets were partially open. However, educational activities like online classes remained suspended due to suspension of internet services on mobile devices. Internet services are currently available on broadband and fiber platforms only in the valley.