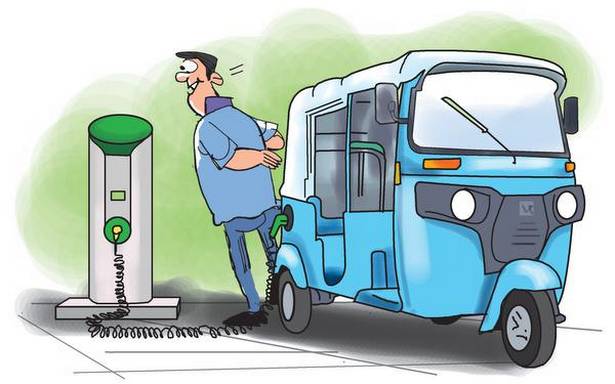 The skyrocketing price of fuel, including of CNG that crossed ₹70 this month, has led to autorickshaw operators banking hopes on staying afloat by retrofitting electric kits in conventional autorickshaws.

“Each new e-auto that comes with fixed battery is priced up to ₹3.30 lakh, while the retrofitting process is estimated to cost approximately half as much. Such substantial lowering of investment in an extremely price-conscious segment like autorickshaws, looks feasible and is the need of the hour. Especially so, since auto drivers were amongst the worst hit by the pandemic-induced fall in demand for public transport,” said Binu Varghese, secretary, Autorickshaw Drivers Union (AITUC), who was among the office-bearers from Kerala who visited manufacturing units of different e-auto firms and did test drives.

“We hope to get a clearer picture when the State-level retrofitting process begins in Kochi in January 2022. The retrofitting cost can further be brought down if the State or the Centre announces a subsidy, on the lines of the subsidy that both the governments currently extend to new e-autos. Each fossil-fuel run autorickshaw now incurs minimum ₹400 as fuel expense and this leaves hardly anything left for the driver or operator. This is simply not sustainable and there is demand for alternative fuel options like battery-run vehicles. The added advantage is that they do not cause sound and air pollution, and also cause much-less vibration,” he added.

Even among e-autos, there are ones having fixed battery, and others whose drained-out batteries can be swapped with fully-charged ones.

“The fixed battery option will be tried out initially, since the batteries can be recharged at home using a normal five-ampere power plug, including for single-phase connection, whilst paying domestic tariff. The travel range will be up to 120 km after each recharge,” said Nishanth Ravindran, CEO of Technovia Info Solutions which has been associated with many public-transport related initiatives in the city, who is part of the launch of the retrofitting initiative in Kerala.

The retrofitting process involves retaining the chassis and body, while the rest will be redone, at approximately half the price of a new e-auto. The advantage is that the vehicle’s lifespan increases, while the battery and other components will get warranty. The considerable cost saving for capital, operational expense and the greener fuel option will be the main advantages. It gains relevance since the expected switch over from conventional to new e-autos is not taking place at the same pace as was expected, probably due to the relatively higher capital investment, Mr. Ravindran added.

Sources in the Motor Vehicles Department said such retrofitting is permitted, provided the kit for the purpose has been approved by Automotive Research Association of India (ARAI).