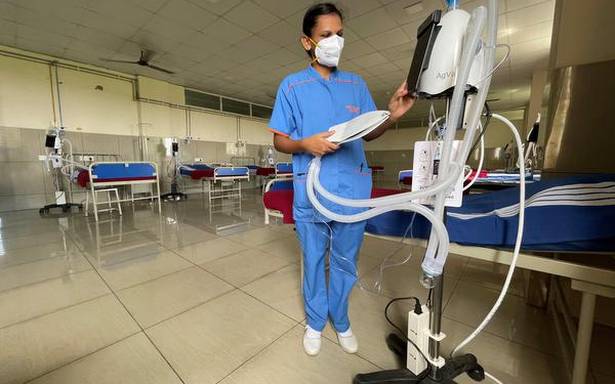 The year 2021 would most starkly be remembered for those heart-wrenching images of families and friends of COVID-19 patients running from pillar to post frantically in search of oxygenated beds. As the year winds down, with the vicious second wave of the pandemic behind us, where do we stand in terms of our oxygen needs and supply?

Currently, of the total Central allocation of 1,200 MT of oxygen per day, the actual usage has been hovering around 160 MT per day for the last two months. Munish Moudgil, who is in charge of oxygen supply from refilling stations to healthcare facilities, said nearly 98% of the oxygen consumption is for patients with non-COVID ailments. Oxygen consumption had remained at 120 MT per day on an average during the pre-COVID-19 period.

Karnataka, which had recorded nearly a five-fold rise in requirement of liquid medical oxygen (LMO) during the peak of the COVID-19 pandemic in April-May this year, now claims to be self-sufficient with a robust oxygen supply chain. While the State now has an overall storage capacity of 1,497 MT, 186 of the 262 new oxygen plants allocated under various initiatives and CSR funds have been commissioned.

This augmentation was following the unprecedented crisis that Karnataka faced in 2021. While the maximum usage in 2020 during the first wave was not more than 420 MT per day, consumption shot up to 581.79 MT by April 30, 2021, and further to 885 metric tonnes on May 22, at its highest. The requirement in Bengaluru city alone was 285 MT per day.

Amidst the oxygen crisis, Karnataka received a jolt on May 24 as a breakdown in two oxygen production plants in Ballari led to a shortfall of 20% of the daily supplies. The huge disruption in supplies reduced oxygen availability by 220 MT per day for a few days. The allocation by Centre — 1,200 MT after intervention from courts — did not help bridge the gap between demand and supply. Karnataka managed to get only around 850 MT on a daily basis from suppliers within the State for some time.

The State Government, which was one of the first States to issue guidelines for medical oxygen management, had in June directed all medical colleges and private hospitals above 50 beds to install their own Pressure Swing Adsorption (PSA)/refilling oxygen plants. While hospitals with above 100 beds have been directed to produce at least two times their normal requirement of oxygen, hospitals with a bed capacity of 50-99 have been asked to be gear up to meet their normal requirements.

In fact, Private Hospitals and Nursing Homes Association (PHANA) thinks that this could create a problem of plenty. It has objected to the directive for 50-bed hospitals on the grounds that the smaller hospitals will not be able to afford it. PHANA president H M Prasanna said that they might “end up with surplus oxygen.” The association has also approached the Karnataka High Court in this regard.

Health and Medical Education Minister K. Sudhakar, said, “Hitherto, oxygen supply to hospitals was mostly centralised and that resulted in severe strain on the supply chain during the pandemic. In this backdrop, we are trying to localise oxygen supply at the hospital level.” Karnataka has received 262 PSA oxygen plants under various initiatives, he said. Karnataka installed and commissioned 186 of these plants and work on 33 plants is underway. Medical oxygen supply in the State has been enhanced to 1,200 metric tonnes since the second wave.