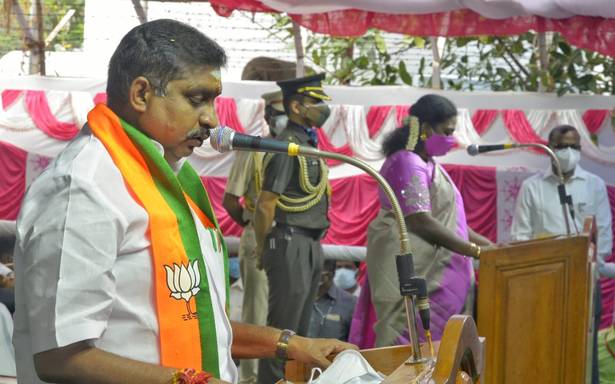 The rift between the All India N R Congress and its ally Bharatiya Janata Party in the National Democratic Alliance government in the Union Territory seems to be only widening with no clear signs of portfolios being allocated to the ministers by Chief Minister N. Rangasamy.

After a protracted delay in constituting the cabinet following the NDA victory in the April 6 Assembly polls, the Chief Minister inducted three members from his party and two from its ally into the Council of Ministers on June 27.

However, even almost two weeks after the swearing-in of the ministers, the portfolios are yet to allocated due to the insistence of BJP in getting certain key portfolios.

According to a political source, the BJP leadership with the concurrence of their central leadership, submitted a wish list of 10 ministries, including Public Works, Local Administration, Excise and Tourism to the Chief Minister. The ministries sought by the BJP were in addition to Home which the Chief Minister had already promised to allot to the BJP, said the source.

The Chief Minister, the source said, had expressed his strong reservation in allotting some of the ministries to the BJP ministers.

“If we give the key ministries to the BJP, the three AINRC members in the cabinet will be left with less prominent subjects which could cause internal problems in our party,” said an AINRC leader. Party leaders and legislators are already miffed with the allocation of the Speaker post to the BJP, he added.

“We want the CM to directly engage with Prime Minister and Home Minister to sort out issues, “ he said.

A BJP leader claimed that their central leadership itself was unhappy with the Chief Minister over the continued dely in forming a proper cabinet and allocation of subjects.

“He has not even called on the PM.The DMK is not our ally. But Tamil Nadu Chief Minister M. K Stalin went to Delhi and met the Prime Minister. Our CM should have led the delegation when our ministers and legislators called on PM last week,” the BJP leader said.

Responding to the delay in portfolio allocation former Chief Minister V. Narayanasamy said normally new governments will have a honeymoon period but not for the present NDA government in UT.

“There is complete mistrust between AINRC and BJP. Two months have passed since the election results were announced. But there is no proper government. Both the parties are doing injustice to the voters. The image of the government has taken a severe beating. Let’s see how long this government will last in its present form,” he added.