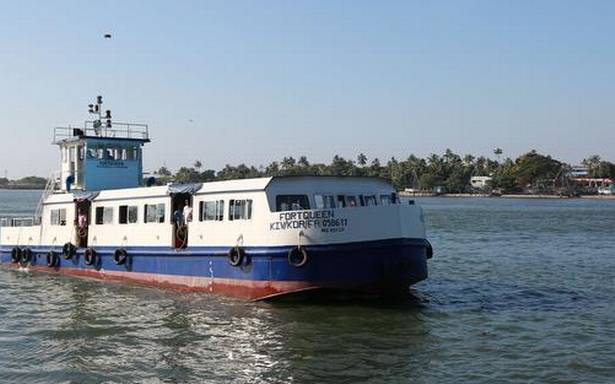 Call to operate Fort Queen, owned by Kochi Corpn., in the sector

One of the two container roll-on roll-off (ro-ro) ferries of the Inland Waterways Authority of India (IWAI) that were handed over to the Kerala Shipping and Inland Navigation Corporation (KSINC) to ferry container lorries and motorists on the Willingdon Island-Bolgatty Island route, might operate in the Fort Kochi-Marine Drive corridor if everything goes well, official sources said.

This is because patronage for the ro-ro vessel that began operation a month ago is just picking up. Its sister vessel could thus be used to ferry commuters in the Fort Kochi-Marine Drive corridor, for which terminal facilities ought to be improved, KSINC sources said.

For a start, the Kochi Corporation-owned ferry, Fort Queen, which too was operated by KSINC and was lying idle for over a year after a pair of ro-ro vessels began service on the Fort Kochi-Vypeen route, could operate in the passenger-dense sector, using the existing infrastructure, they added.

Fort Queen, which was built at the KSINC yard in Thopumpady, is the biggest ferry in operation in Kochi and has seating capacity for 150 passengers. It was recently returned to the Kochi Corporation, after being dry docked at the KSINC yard. It can safely negotiate the Fort Kochi seamouth, since it was built as per specifications of a similar vessel that ferries commuters through the sea from the Kanyakumari beach to Vivekananda Rock Memorial, sources said.

Operating it in the Fort Kochi-Marine Drive sector did not materialise earlier, although the Kochi Corporation had probed the possibility. KSINC used to transport vehicles in the Marine Drive-Vypeen corridor in its junkar ferry service, an older version of the ro-ro vessels, till the trio of Goshree bridges were built 15 years ago.

The ruling LDF had in its election manifesto promised that a ro-ro service would be introduced in the Fort Kochi-Marine Drive corridor.

Mayor M. Anilkumar said the civic body was open to deploy the ferry on the route. “Water transport is one among our priority areas. Introducing a ro-ro vessel in the corridor might take more time, since funds and other facilities ought to be readied,” he added.

Sources in KSINC said the need for ro-ro terminals on either end could be taken up with IWAI, which has funds to promote water transport. The pair of new container ro-ros of IWAI are bigger than their counterparts which operate in the Fort Kochi-Vypeen sector.

Sources in IWAI said they were okay with the proposal, provided KSINC did a traffic study on the corridor. The MoU between the two agencies will have to be amended for the purpose, they said.

Meanwhile, West Kochi Passengers Association secretary Padmanabha Mallaya said introducing a pair of ro-ro vessels in the sector would considerably lessen commuting time with the mainland, expenses, congestion, and pollution on the 15-km road route. “In contrast, the waterway route is just over 3 km, and commuters will have to pay much lesser than over ₹15 that is charged by buses. In addition, the route can be covered in 20 minutes, as compared to over an hour by road,” he added.

A ferry or ro-ro service operated by KSINC will be Godsend, since SWTD services are irregular, and they do not carry vehicles on board, said Ayoob M.M., a regular commuter.