What will be its impact on the banks’s balance sheets?
Since banks need to provide for 10 per cent of the loans restructured, they would need Rs 50,000 crores to Rs 80,000 crore for this purpose, notes Tamal Bandyopadhyay. 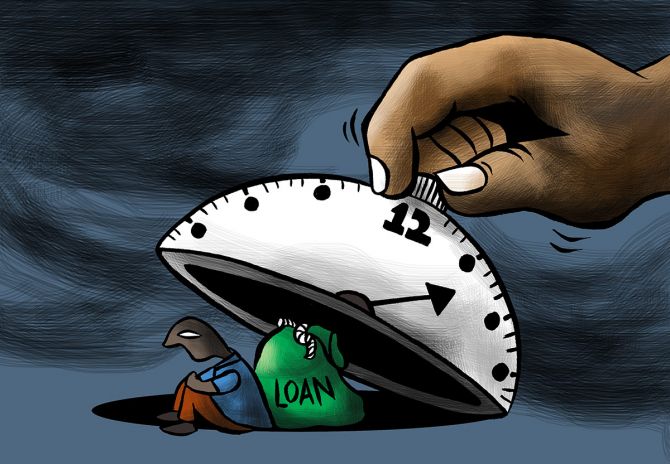 In the last week of March, the Reserve Bank of India asked all lending institutions to offer a three-month moratorium to their borrowers, affected by the COVID-19 pandemic, on payment of loan instalments between March and May.

Later, the banking regulator extended it by three months, till August.

While the moratorium has ended, a new window is being opened for restructuring those loans that the borrowers are unable to service because of their businesses being affected by the pandemic.

The loans can be restructured by funding interest, converting part of debt into equity and giving the borrowers more time — as much as two years — to pay up.

In percentage terms, the number of borrowers availing of the moratorium has been progressively decreasing over the past months, but there is no clarity yet on how many would seek restructuring of their loans and the impact this exercise would have on the banks’ health.

As of August 14, the commercial credit portfolio of the Indian banking system was a little over Rs 101.5 trillion. Everyone and her aunt is busy offering guesstimates of how much bank loan will be restructured.

The banking community estimates that between 5 per cent and 8 per cent of its loan assets can knock at the restructuring window.

This means, around Rs 5 trillion to Rs 8 trillion worth of loans will be restructured.

What will be its impact on the banks’s balance sheets?

Since the banks need to provide for 10 per cent of the loans restructured, they would need Rs 50,000 crores to Rs 80,000 crore for this purpose.

A few may need capital for credit growth after this, but overall the operating profits of most banks should be able to cushion the shock of this provision.

On the positive side, many of the banks have already taken care of the provision required for their legacy bad loans.

The so-called provision coverage ratio of the State Bank of India in the June quarter was 86.3 per cent.

Most public sector banks have provided for around 80 per cent, or more, for the bad loans already recognised.

Besides, most banks have started setting aside money to provide for COVID-19 affected loans, beginning the March 2020 quarter.

One, only those loans that were standard in banking parlance as on March 1, 2020, can be restructured.

Two, they need to be restructured within two years.

These norms rule out deep restructuring, which some of the corporate loans require.

Those loans, which had turned bad by March and need longer timeframe for recast, cannot be covered by this scheme.

For such loans, I suppose the banks will insist on a change in ownership of the borrowing companies as outlined in RBI’s June 2019 restructuring guidelines.

They will be taken to the insolvency court or there could be out-of-court settlements between the bankers and the borrowers.

Simply put, those corporations that were already sick before the COVID-19 attack on their business cannot gatecrash into the new restructuring scheme.

That leaves us with two sets of loans that could be restructured on a large scale: Retail loans such as mortgage and auto loans, among others; and loans given to micro, small and medium enterprises.

Typically, retail borrowers are careful about their credit score/ratings as any default will close the door for bank loans on them forever.

Hence, there is unlikely to be any wilful default (where they have money to service the loans but are not doing so).

There could be cases of customers losing jobs or self-employed persons going through a rough patch.

Some of them may quit their vocation and close the loans, while others will look for restructuring.

The most complex piece is the MSME segment.

Till the government redefined such enterprises in May 2020, there were about 63.05 million micro, 0.33 million small, and about 5,000 medium enterprises — the second biggest employer in the country with a 31 per cent share in India’s GDP.

Even in normal times, they have problems with cash flow as they are forced to wait to collect bills and, quite often, the government is the culprit, holding back payments.

The MSMEs do not have the capacity to carry such receivables.

The pandemic has played havoc with many of them.

Even this may not be of great help to all the MSMEs. A simple extension of moratorium will not end the woes of those who have eaten up their capital.

The Rs 20,000 crore sub-debt scheme with a 90 per cent government guarantee, part of the Atmanirbhar Bharat package, may come in handy for them.

Under this scheme, the MSME promoters can be given money equal to 15 per cent of stake in the company or Rs 75 lakh, whichever is lower, for a maximum period of 10 years, with a seven-year moratorium on principal payment.

This means interest has to be paid only for the first seven years and the principal amount is to be repaid within three years after the moratorium ends.

Some of the MSMEs and retail customers were not paying banks back till August as they preferred to conserve cash in uncertain time.

After the moratorium lifts, they may start servicing the bank loans. Clarity will emerge in October but one thing is for sure that the latest restructuring of loans is very different from past such schemes.

There are enough filters in the COVID-19 loan restructuring scheme to prevent misuse, both by the borrowers and banks.

Still, is it a tool to delay the growth in banks’ bad loans?

We will have to wait for two years to find out.

Tamal Bandyopadhyay, a consulting editor with Business Standard, is an author and senior adviser to Jana Small Finance Bank Ltd.