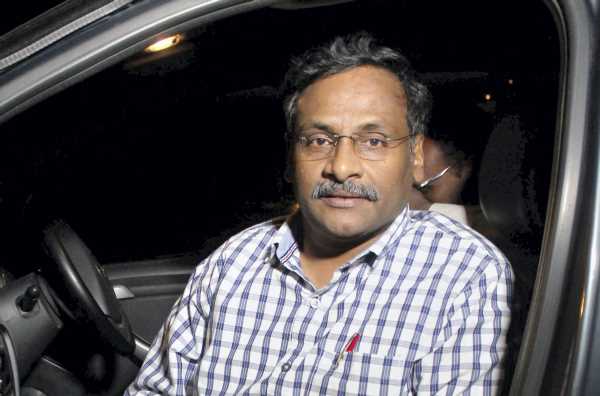 His spine, his heart, his pancreas — one by one, all his organs have weakened, given the lack of medical treatment in jail, where he is kept in the notorious Anda cell.
Continuous pain, frequent fainting spells, urinary problems, have all become part of his life.
Jyoti Punwani reports.

Ordered to be released from jail after five-and-a-half years of solitary confinement by the Bombay high court, and then 24 hours later, to have that order stayed by the Supreme Court — this snatching away of freedom may be more difficult to bear than the relentless series of disappointments that the 90% handicapped political prisoner and his co-accused have had to face over the last eight years.

Professor Saibaba and five others were convicted and sentenced to life in 2017 by a Gadchiroli district court for having links with Maoists. He has since been lodged in the Nagpur Central Jail, in solitary confinement.

On Friday, October 14, 2022, morning, the Nagpur bench of the Bombay high court discharged all the accused on grounds of invalidity of sanction needed to prosecute under UAPA, and declared the trial proceedings null and void.

On Saturday morning, a two-judge bench of the Supreme Court, convened specially to hear the Maharashtra government’s appeal against this judgment, suspended it, saying the matter had not been decided on merits.

Even as these five prisoners were trying to meet the high court’s requirements for release, the possibility of release was quashed.

The unexpected development left Vasantha, Professor Saibaba’s wife, unusually quiet. Normally very vocal about the way her husband has been treated, this time all she could say was, “We have been facing this kind of thing from the very beginning.”

She and her daughter had not made any special preparations for his homecoming, she says, because they first wanted to get him admitted to hospital so that he could recover his health. “He needs proper treatment, he needs rest.”

The disappointments Professor Saibaba has faced since his arrest in 2014 have not been minor.

As an undertrial in December 2015, while out on bail for medical treatment, his bail was cancelled and he was ordered to surrender within 24 hours. Since his conviction in March 2017, his pleas for bail have twice been rejected despite his deteriorating health and despite being afflicted by COVID-19.

His pleas for parole too have been turned down: First to visit his dying mother who had lived with him throughout his life, and then again to attend her last rites. He has been denied medicines, books, clothes…

Yet, Professor Saibaba never lost his spirit. What he lost steadily was control over his body.

Unable to use his legs since childhood because of post-polio paralysis, 55-year-old Professor Saibaba was still able to move around on his own in a wheelchair when he was first arrested in May 2014.

Today, says his wife Vasantha, the former professor of English at Delhi University hovers between life and death. His left arm, his spine, his heart, his pancreas — one by one, all his organs have weakened, given the lack of medical treatment in jail, where he is kept in the notorious Anda cell.

Now, even his right hand is growing weaker, says Vasantha. “Earlier, he used to write to us regularly, now he can’t do that.”

The only organ that refuses to weaken is Professor Saibaba’s brain. Is that what the State cannot tolerate?

On Saturday, responding to Professor Saibaba’s lawyer’s plea not to stay his release given his precarious physical condition, Supreme Court Justice M R Shah said: ‘For terrorism and Naxal activities, brain usage is more important than any other physical involvement.’ The judge hastened to add that he was making a general statement.

The 2017 judgment convicting Professor Saibaba too, had a reference to his brain. Wrote then Gadchiroli District Court Sessions Judge Suryakant Shinde: ‘Though G N Saibaba is 90% disabled, he is mentally alert.’

These remarks were criticised by the high court in its order discharging Professor Saibaba and his co-accused as ‘unwarranted’ and liable to make the judgment ‘vulnerable to the charge of lack of dispassionate objectivity.’

Professor Saibaba’s arrest was seen as a consequence of his campaign against Salwa Judum in Chhattisgarh and Operation Green Hunt, which entailed the clearing of Adivasi villages to enable corporates to mine the forests for their resources.

Prashant Rahi and Hem Mishra, a JNU student, were active in the campaign to release political prisoners.

Tribal youth Pandu Narote, also convicted in the case, died in August. His family was informed of his illness only when Narote was admitted to the Nagpur Government Hospital, by which time he was already seriously ill.

When Narote’s lawyer met him in hospital, his client told him that for five days, he had been vomiting blood and also passing blood in his urine. But no treatment had been given to him in jail. The young man pleaded with his lawyer to take him to another hospital. Journalist Prashant Rahi, also discharged on Friday along with Professor Saibaba, was also kept in the Anda cell in the Amravati Central Jail, let out of his cell only once in two days, according to his daughter Shikha. He too has had his share of disappointments in this case.

His plea for suspension of sentence was turned down twice by the high court, even though the public prosecutor could not present any finding in the trial court judgment regarding his involvement in any terrorist activity.

Even after the Supreme Court suspended the sentence of his co-accused Vijay Tirki, Rahi was denied the same by the high court on grounds of parity.

Like Professor Saibaba and Narote, 62-year-old Rahi too has experienced what is now common in Maharashtra’s jails: Neglect of a prisoner’s health. Unable to tolerate the jail’s spicy food, Rahi started suffering frequent episodes of diarrheoa and vomiting since July this year, but was not even given basic ORS.

A specialist was called to attend to him only after his daughter approached the high court in early September.

In 2007, Rahi had been arrested under UAPA on charges of being a Maoist in another case in Uttarakhand. In January this year, he was acquitted of all charges in that case.

But he could not taste freedom, for at that time, he was in the Amravati Central Jail, serving his life sentence in the Gadchiroli case.

Expectedly, Shikha, who has struggled untiringly to prove her father’s innocence, was angry at the latest turn of events. She had attended the final hearings of the case which had gone on for 10 days, and had hoped that her father and his co-accused would be released on merits. Though the defence lawyers had argued both on merits as well as validity of sanction, the judges chose to focus only on the latter.

Referring to the Maharashtra government’s haste to appeal against the discharge of her father and his co-accused, Shikha Rahi asks:

“The question is, what is the State doing so wrong that it is so scared of a handicapped professor’s brain, an out of job journalist, a student, and an Adivasi with no resources (Mahesh Tirki)?”

“The State has already silenced the entire nation by arresting the minutest voice of dissent. And now it fears that its acts will spark a rebellion among these half dead people! I wonder at the nature of these acts,” says Shikha Rahi.

Asked if she was depressed at the sudden turn of events, Vasantha, Professor Saibaba’s wife, replies, “No…I can’t afford to get depressed. But I’m surprised to see so many others in depression. Many people called me and some even came to see me. They were in tears.”