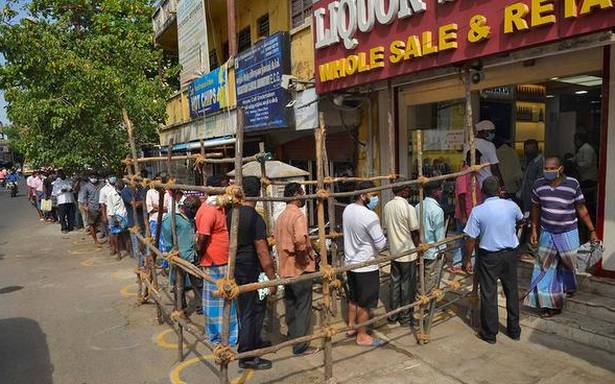 Only some go in search of spirituality, while many go after spirits, says Madras High Court.

Observing that only some go in search of spirituality while many go after spirits on New Year Day, the Madras High Court has banned the sale and supply of alcohol in Puducherry from 10 p.m. on December 31, 2021 till 1 a.m. on January 1, 2022.

The court made it clear that the ban should be implemented in all independent bars, bars attached to hotels and restaurants and all other places where alcohol is intended to be supplied to “customers or public”.

While one of the petitioners, G.A. Jagannathan of Karikalampakkam, had insisted on imposing a total ban on New Year celebrations in the Union Territory due to the threat posed by the Omicron variant of COVID-19, the other petitioner, S. Sridhar of Easwarankovil Street, had urged the court to restrict the celebrations.

Taking note of the threat posed by the novel coronavirus and its mutations, the judges ordered that people who had not taken two doses of the COVID-19 vaccine should not be allowed to participate in the New Year celebrations in public places in Puducherry after 7 p.m. on December 31.

Participants should carry their Aadhaar card and proof of having been vaccinated with two doses, and furnish them when asked to do so by the police and other officials.

The court also directed government officials to ensure the availability of breath analysers in sufficient numbers to catch those who drive under the influence of alcohol.

“If found drunk, immediate medical check-up shall be done to take the violators to task,” they said. The government was also ordered to ensure that celebrities do not participate in the New Year celebrations in public places (except hotels) after 10 p.m.

“Celebrities must understand that the health of citizens is more important than the celebrations. At a later point of time, the celebrations should not end up in mourning. Normally, the above conditions would not have been imposed, more particularly in a spirited place like Puducherry. But taking note of the present situation, this court has imposed the aforesaid conditions as we are of the view that prevention is better than cure,” the Bench said.

“In fact, celebrities should come forward to propagate the dangerous situation that may occur on account of spread of Corona/mutated virus… Though, it has been submitted that license has already been issued to shopkeepers for sale of liquor, every citizen has got the responsibility to prevent the spread of virus to another citizen. Hence, they should also take the responsibility and cooperate with the government in preventing the spread of the virus.”

Authoring the order, Justice Vaidyanathan said, “Every New Year is one step towards the graveyard,” since it is an indication of people ageing.

He said the court-imposed conditions for the celebrations would be in addition to those imposed by the government, and that it was mandatory for participants to wear masks, maintain physical distance and so on. The organisers should ensure that there is only 50% occupancy.