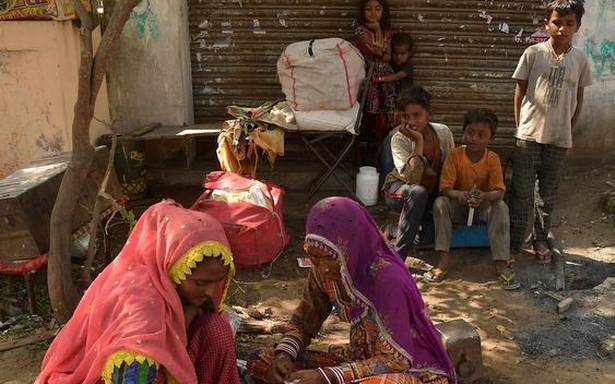 Migrant families who travel to Tiruchi to sell billhooks and sickles, usually purchased by farmers and agricultural labourers in the district, have lost their source of livelihood as police restrict sales. The makers travel to various parts of Tamil Nadu once a year, where they spend months making and selling agricultural equipment from locally available iron.

Four women and ten children were seated in front of a small shed in Khajamalai main road looking to sell knives, billhooks, sickles and some shovels. They had made these over the last month and had set up shop there on Tuesday morning. However, within hours, police personnel asked them to refrain from selling their ware. There have been multiple incidents of attacks using weapons in the state over the last few months.

Speaking to The Hindu, Rani Billo, the eldest woman in the group said that she had been travelling to Tamil Nadu for the last 20 years. The entire family would pack up their belongings and travel to the southern states where they would stay for at least five months. The women would make and sell them, while the men would work as labourers. The money they make would sustain them for the remaining seven months. "We learnt how to make these tools from our parents. We travel to different parts of the country to sell them," she said. The COVID-19 lockdown had already dealt them a hard blow, and the police restrictions added to it.

The equipment is also purchased by families to chop coconuts and other such kitchen use. "We make the instruments for agricultural use. People using it for criminal activities is not our fault," Rashi Banu, one of Billo’s daughters’ said. Their nomadic lives were determined by the harvesting seasons in the states they travel to. "We know that sugarcane is harvested in these parts soon. We hoped to sell some sickles by then," Banu said. The sickles range anywhere from Rs. 100 to Rs. 500.

Unsure of where to go, the women and their children were waiting for their husbands to return to travel elsewhere. “We do not know where to go, but we must move if we plan to sell our ware,” Billo said.