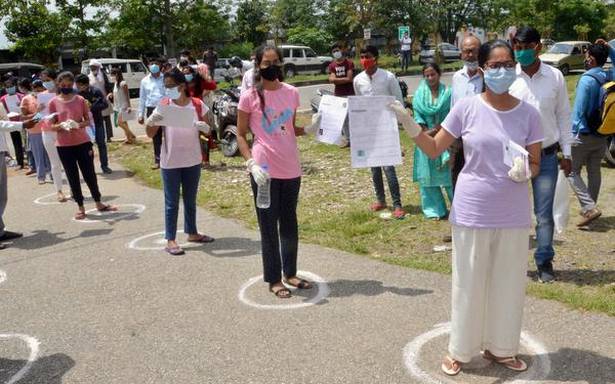 “We can’t interfere. We understand what you say but it will create a lot of confusion. Any interference at our hands will be detrimental to a large number of students,” the bench also comprising Justice B R Gavai said.

A bench headed by Justice L Nageswara Rao said that it realises the problems highlighted by the petitioner but it was not inclined to intervene in the matter.

“We can’t interfere. We understand what you say but it will create a lot of confusion. Any interference at our hands will be detrimental to a large number of students,” the bench also comprising Justice B R Gavai said.

At the outset, senior advocate Salman Khurshid, appearing for the petitioners, said that he was not pressing the prayers for cancellation of the exam and conduct of fresh tests in view of the fact that the same prayers were declined earlier.

He submitted that FIRs have been filed at various places and sought the top court’s direction to call for a fact-finding report on the issue.

The apex court said that the results have not been announced and asked if there is any doubt in the mind of the National Testing Agency.

Khurshid told the bench that this must be in the normal course.

The senior lawyer then sought liberty to approach the court with similar prayers at a later appropriate stage if some material comes to the fore.

The top court said any observation by us will be taken out of context and confuse students.

Sensing disinclination of the bench to entertain the matter, the senior advocate withdrew the plea and the case was dismissed as withdrawn.

The top court was hearing a plea filed by Vishwanath Kumar and others contending that on the date of the NEET UG examination, the CBI had registered FIR against four accused persons and unknown others, stating that the process of examination was manipulated by using proxy candidates.

Earlier on October 4, the apex court had refused to entertain a similar plea saying cancellation of the exam cannot be at the cost of lakhs of students.