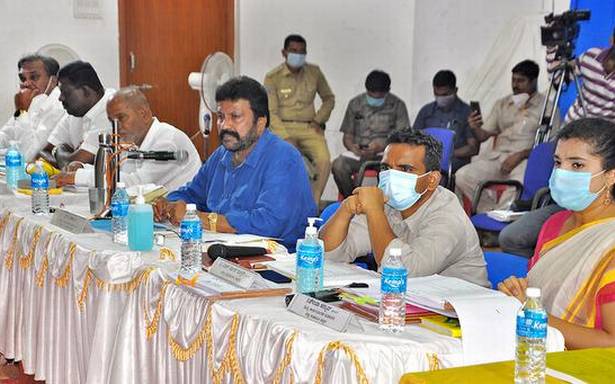 Anticipating the third wave of COVID-19, Minister for Agriculture and Koppal in charge B.C. Patil has directed the district administration to conduct extensive screening of children before the opening of schools.

“The academic year is going to start shortly. At the same time, there is a possibility of COVID-19 third wave which, according experts, might hit children. You need to summon children before the schools reopen and check their health. Both teachers and parents need to take utmost care of the children to protect them from the third wave. The Health Department should make preparations to expand their paediatric facilities to treat children with COVID-19,” Mr. Patil told the district administration during a quarterly KDP meeting that he chaired at the district administrative complex in Koppal on Wednesday.

“There is no dearth of fertilisers in the district. Yet, farmers are not getting it due to improper supply. Agriculture Department officials should take immediate steps to ensure proper distribution of fertilizer as per the need… There are problems in the payment of crop insurance amount also. In the crop insurance scheme for 2020–21, 83,000 farmers had registered. Of them, 10,300 farmers had together been paid the sum insured that was about ₹10.35 crore. What about the rest of the farmers? Officials concerned should look into it seriously and take up the issue with the insurance company. If there are some problems, you should intervene and resolve them to ensure that all the affected farmers got the sum assured,” Mr. Patil told the officers.

Complaints of illegal sale and overpricing of liquor in the district was also discussed in the meeting and Mr. Patil held the Excise Department officials responsible for it.

“Overpricing or illegal sale of liquor cannot go on without the cooperation of officials in the Excise Department. The Excise Commissioner should prepare a list of officers serving in the same place for more than three years and take steps to mandatorily transfer them.