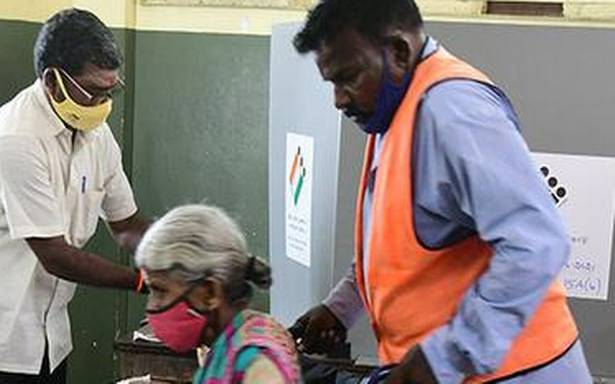 Wheelchairs and volunteers were deployed at booths

During Assembly and Lok Sabha polls, senior citizens normally face difficulties in accessing booths in the city and in nearby districts. Senior citizens and the physically challenged find it difficult to climb steep and narrow staircases. The absence of ramps and wheelchairs add to their woes.

However, this election, authorities offered postal votes to those above 80 and announced the construction of ramps at all booths and provision of wheelchairs with volunteers.

The Greater Chennai Corporation and the Kancheepuram district administration arranged for wheelchairs at all booths and posted volunteers drafted from the National Service Scheme (NSS). Yet, a few senior citizens complained about the lack of wheelchairs.

M. Dhanalakshmi, 80, of T. Nagar, said she was unaware of postal voting; nor did she find any wheelchair with volunteers at a school on Venkatnarayana Road in the city. Finding that wheelchairs were not available, she voted with the help of her granddaughter.

A. Annapoorani, 94, of Vinayakapuram, thanked the civic body for providing wheelchairs and constructing ramps, which helped in easy access to her booth at a corporation school in Chepauk. Chinnayan, 95, went to the booth at a government school at Tirupattur in a wheelchair. Yasodha, a resident of the TNHB quarters at Kancheepuram, was all praise for the Collector for providing senior citizens with wheelchairs and NSS volunteers.