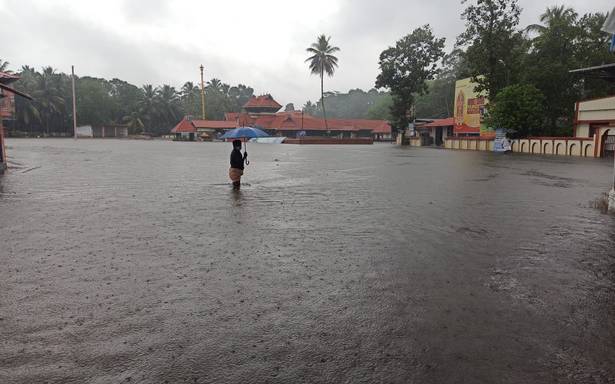 As of Sunday morning, the district administration opened 15 relief camps at different places and shifted over 160 people there.

Though rainfall almost subsided in Alappuzha on Sunday morning, a rise in water levels in major rivers has led to the flooding of low-lying areas.

Floodwaters have entered a number of houses in Thalavady, Muttar, Edathua, Veeyapuram and Pallippad in Upper Kuttanad. Parts of the Alappuzha- Changanassery (AC) road and Ambalappuzha- Thiruvalla road have been waterlogged.

At least 30 families from Mulakuzha and Edanad in Chengannur were shifted to relief camps after floodwaters inundated the areas.

With the water flow through the rivers including Pampa, Manimala and Achencoil expected to increase further due to heavy downpour in the neighbouring districts, the district administration has made all necessary arrangements to deal with any exigency.

Officials said that boats would be deployed to conduct rescue operations if needed. "We have identified 470 buildings including two cyclone shelters to shift people. In case of an emergency situation, bedridden patients in Kuttanad will be shifted to Alappuzha Town Hall. Changanassery Town Hall in Kottayam will be used to house people from the eastern parts of the Kuttanad taluk," said an official.

As of Sunday morning, the district administration opened 15 relief camps at different places and shifted 163 people there.