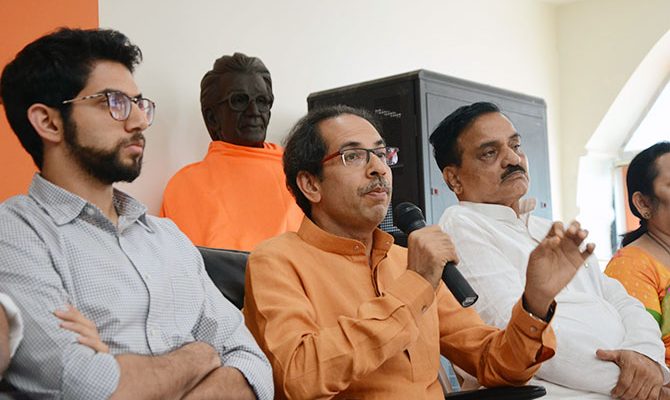 ‘We have not decided yet if we will be joining hands with the BJP and, if so, what kind of ministries will be distributed among the rebel MLAs’

A four-time Shiv Sena legislator who has thrown in his lot with rebel leader Eknath Shinde in Guwahati, says the dissident Sena MLAs have no personal grudge against any leader but were hugely upset over obstacles like resource crunch for the development of their constituencies.

“The media is only talking about the ill-treatment (meted out) to Shinde Saheb. But he is not the only one who was ill-treated. All of us who are with Saheb were upset with the way the MVA was functioning.

“Nobody was happy with the pace of development work happening in their constituencies. We have to perform and only our performance will help us get re-elected. Shinde Saheb just became the face of all that was wrong within the Shiv Sena-led MVA,” this leader told Rediff.com on the condition of anonymity. Read on…

According to my information we are 37-38 Shiv Sena MLAs (two-thirds of the party’s strength in the Maharashtra assembly, a number that will stand scrutiny under the anti-defection law) here in Guwahati. Some like Yogesh Kadam (son of Ramdas Kadam, former Shiv Sena MLA from Ratnagiri’s Khed, and who was recently involved in a spat with transport minister Anil Parab and had threatened to walk out of the Shiv Sena) are on their way.

We don’t know when we (the rebel Shiv Sena MLAs) will be back in Mumbai.

Let me tell you the procedure.

Following that the governor will decide what necessary steps to take (for government formation in the state).

For us Eknath Shinde remains the chief whip of the Shiv Sena in the legislative assembly.

They (MLAs supporting Uddhav Thackeray) might have named someone else (Ajay Choudhury) as the leader of Shiv Sena in the legislative assembly but they don’t have the numbers with them to do so. That is unlawful.

‘No word on government formation yet’

There is no BJP leader communicating with us. I don’t know who Sanjay Kute (BJP MLA from Jalgaon who met Shinde on Tuesday) is and did not speak with any BJP leader.

We have not decided yet if we will be joining hands with the BJP and, if so, what kind of ministries will be distributed among the rebel MLAs. I am a small man but let me be honest, there is no such talk yet about government formation.

On being moved from Surat to Guwahati

I don’t know why this was done. Please let me know if you have any information about it.

Nobody is under any pressure, physical or mental. Reports that Shiv Sena MLAs were beaten up by the Gujarat police are baseless. If that were the case, then why would all those who were in Surat move to Guwahati?

Nobody is assaulted physically. Do you think an MLA will sit quiet if he is beaten up? Forget MLAs, even a gram panchayat member doesn’t take such attacks lying down.

Nitin Deshmukh is doing well now (the Shiv Sena MLA from Balapur, Akola, had complained of chest pain and was admitted to and later discharged from Surat Civil Hospital; MP Sanjay Raut had claimed that he was roughed up by the Surat police while trying to escape from Le Meridien hotel in the city).

He is absolutely fine; he was with us on the plane to Guwahati.

‘All the rebel MLAs were unhappy’

Almost all the MLAs who have rebelled did speak (to Chief Minister Thackeray and other senior Shiv Sena ministers) about obstacles being created in the functioning of their ministries and constituencies.

When we are in government, then one should take credit for victory as well as defeat.

On being under pressure

Whenever an MLA takes such a big decision (to split from the parent party), he always thinks twice if he is doing the right thing. That naturally brings some pressure on the person.

Those who have become MLAs and ministers for the first time (in an apparent jibe at tourism minister and Uddhav Thackeray’s son Aaditya) don’t get this.

When you know that a person is under pressure and is complaining of chest pain, then it is your (chief minister‘s) duty to get him checked and admit him to hospital if needed (address the issues of development raised by party MLAs). And if something happens to that person, if his complaint is not addressed, then you get into bigger trouble ((rebellion by Shiv Sena MLAs and likely fall of the government).

38 Shiv Sena MLAs are in Guwahati right now. We are expecting four more including Yogesh Kadam, who is on the way.

The media is only talking about the ill-treatment to Shinde Saheb. But he is not the only one who was ill-treated. All of us who are with Saheb were upset with the way the MVA was functioning.

Nobody was happy with the pace of development work happening in their constituencies.

We have to perform and only our performance helps us get re-elected. Shinde Saheb just became the face of all that was wrong within the Shiv Sena-led MVA.

We are all upset because enough was not being done for developmental work; nobody has any personal animosity towards any leader.

While it is accepted that you cannot satisfy everybody, but that all of us were dissatisfied speaks a lot (about the leadership of the chief minister).